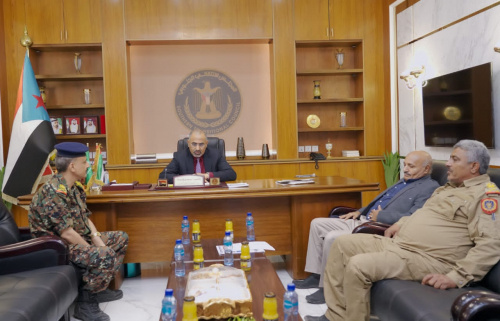 President Aidarous Qassem Al-Zubaidi, the president of the Southern Transitional Council (STC), Deputy head of the Presidential Leadership Council (PLC), on Sunday, met at his office, in the capital Aden, with Major General Abdullah Yahya Jaber, Undersecretary of the Ministry of Interior for Human Resources and Financial Affairs.

In the meeting, which was attended by Major General Saleh Al-Sayed Staff of the Southern Land Forces,

Security Director of Lahj Governorate, and Major General Fadl Baa'esh, Commander of the Special Security Forces, Aden, Lahj, Abyan, and Al-Dhalea, President Al-Zubaidi was briefed by Undersecretary Jaber on the workflow in the human and financial resources in the ministry, and the efforts made to improve the performance and upgrade its mechanisms to cope with developments of the stage.

President Al-Zubaidi stressed the importance of making more efforts to arrange and organize the human and financial resources in the ministry to ensure the regular payment of the security forces' dues and to overcome the imbalances occurred in the past period.

President Al-Zubaidi reiterated the support of the PLC for the exerted efforts of the Undersecretary of the Ministry of Interior for Human and Financial Affairs to ensure a regular payment of the salaries of personnel of the security services to contribute to alleviating their suffering and improving living conditions.

For his part, Undersecretary Jaber expressed his thanks and appreciation for the immense efforts made by President Al-Zubaidi and his constant keenness to closely examine on conditions of the security forces, and to support the endeavours made by the human and financial resources in the Ministry of Interior to serve the ministry’s personnel.