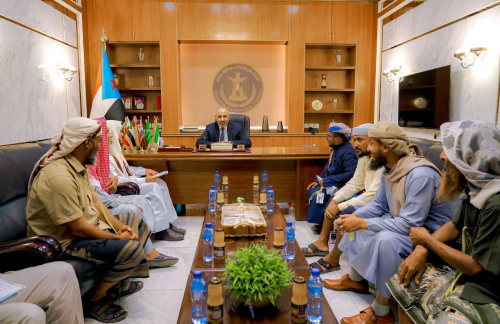 The meeting was dedicated to discussing ways and means of unifying and integrating the religious body to assume its purposeful duty in guiding communities to contribute to the southern cohesiveness and rapprochement, where the president stressed the importance of strengthening the principles of tolerance and reconciliation, spreading the moderate religious sermons, rejecting differences, and depending on the firm belief in dialogue to solve all problematic troubles; based on the deep-rooted belief in the principle that the South will only be with and for all its people.

For his part, the deputy head, sheikh Manaf Al-Hetar on behalf of his colleagues members of the religious body expressed his honour and pride of the immense victories achieved to the South, and its blessed revolution under the leadership of President Al-Zubaidi,

reiterated the support and assistance of the religious body for all the steps that the president takes to achieve triumph to the South and fulfill its people's aspirations in independence and restoring the State of the South with its full sovereignty.