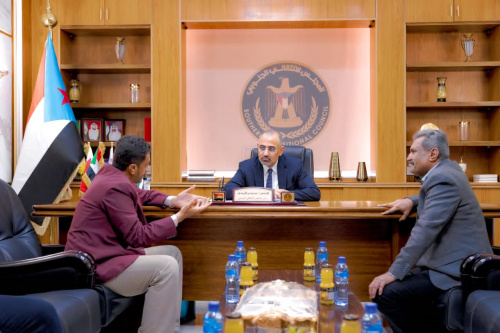 Initially, President Al-Zubaidi reassured on the health of Brigadier General Al-Anbouri after returning from a medical trip in the Arab Republic of Egypt, praising his efforts and contributions in maintaining stability and security in the capital, Aden during his command of the Special Security Forces.

In the meeting, the president lauded the supreme sacrifices made by all the people of Abyan and the tribal society of Bakazem, in particular, in all the crucial turns and stages of the southern revolution, will surely be remained a source of pride to all people of the South.

For his part, Brigadier General Al-Anbouri expressed his thanked and appreciation to President Al-Zubaidi on the efforts he made to achieve the Southern rapprochement, and strengthen the southern national cohesiveness, at the same time, Al-Anbouri assured that all the people of Abyan and Bakazem, in particular, are ready to make the supreme sacrifices to achieve the ultimate goals for which the people of the South have been sacrificing their souls.

The meeting was attended by Mr. Hasan Munasar Ghaithan, Member of the National Assembly of the STC.