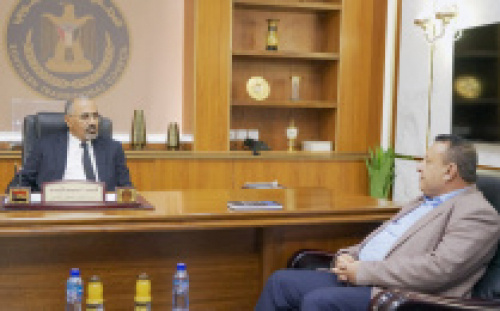 President Aidarous Qassem Al-Zubaidi, the president of the Southern Transitional Council (STC), Deputy head of the Presidential Leadership Council (PLC), on Monday, at his office, in the STC's headquarters, in the capital Aden, met with Dr. Abdullah Al-Maisari, Deputy Minister of Civil Service.

President Al-Zubaidi listened from the Deputy Minister to a brief explanation of the stages of establishing the ministry in the capital, Aden, after liberating it from Houthi militia, and the progressing work in the ministry and its affiliated offices, from

post-liberation period to the present time, in addition to the most prominent difficulties and challenges encountering its work.

At the same time, President Al-Zubaidi was briefed by the Deputy Minister on mechanism of the ministry for listing the state administrative apparatus, old aged pensioners, and mechanism of the replacement and new employment, as well as the completed procedures concerning the annual increments and settle downed-salaries on each-deserved employee in the government, in accordance with the stipulated regulations and laws.

In the meeting, the president overemphasized on expeditiously completing and reviewing files of the annual increments and settlements of government employees and pensioners, further to implementing eligibility of each deserved employee, affirming the readiness of the PLC to ease any encountered difficulties in all aspects relating to the administrative apparatus of the state.