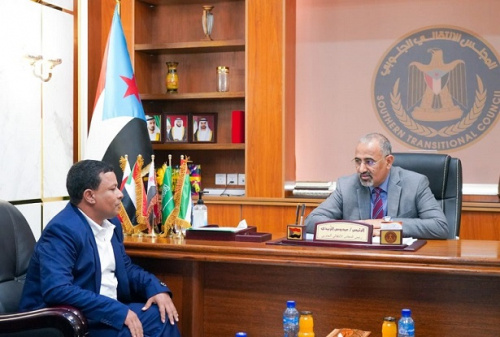 The president Aidarous Qassem Al-Zubaidi, President of the Southern Transitional Council (STC), Deputy head of the Presidential Leadership Council, on Thursday, at his office, in the STC's headquarters, in the capital Aden, met with Brigadier General Ali Ahmed Al-Rajdi, the former security director of the Socotra Archipelago.

President Al-Zubaidi was briefed by Brigadier General Al-Rajdi on the developments in the security situation in Socotra Governorate and the efforts made by the security services to maintain security and stability in the archipelago.

President Al-Zubaidi lauded the immense efforts made by the successive security directors of Socotra in maintaining public tranquility, strengethening the rule of law, and combating alien phenomena in the peaceful society,

of Socotra. In the same context, he stressed the importance of raising security vigilance, to protect the achieved gains for the people of Socotra in various fields.

For his part, Brigadier General Al-Rajdi expressed his thanks and appreciation to the president Al-Zubaidi for his keenness in monitoring the situation in the Socotra Archipelago, and his incessant support for the security services in the governorate to efficiently and effectively perform their tasks