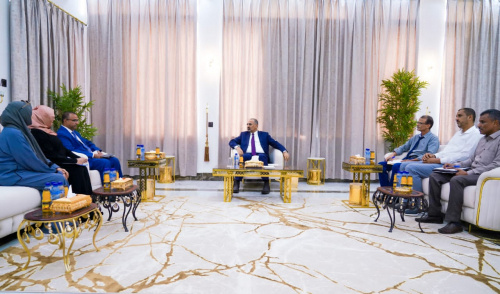 The president Aidarous Qassem Al-Zubaidi, President of the Southern Transitional Council (STC), Deputy head of the Presidential Leadership Council (PLC), on Wednesday, met with Dr. Mohammed Saeed Al-Zou'ari, minister of Social Affairs and Labour (SAL), and the Board of Directors of the Social Welfare Fund (SWF), headed by Ms. Najla' Al-Sayed, Executive Director of the SWF.

In the meeting, the president Al-Zubaidi was familiarized with the progressing work in the SWF, the encountered difficulties and the efforts made by the Ministry of SAL to promote the work of the SWF, restore its premises in all governorates, expand the scope of work and empower it to implement the assigned projects.

Likewise, the president Al-Zubaidi directed the Prime Minister and Minister of SAL to jointly work with the international partners to enable the SWF to perform its role within the jurisdictional right, foremost of which is returning the UNICEF-Humanitarian Cash Transfers Programme to the SWF, as it is the official authority designated of its execution.

In turn, Minister Al-Zou'ari, expressed his thanks and appreciation for all the efforts made by the president Al-Zubaidi to proactively contribute to developing state institutions and operating service-activities to citizens, valuing his role in supporting the SWF to restore its status as a national institution serving millions of citizens from the poorest and the most vulnerable families.