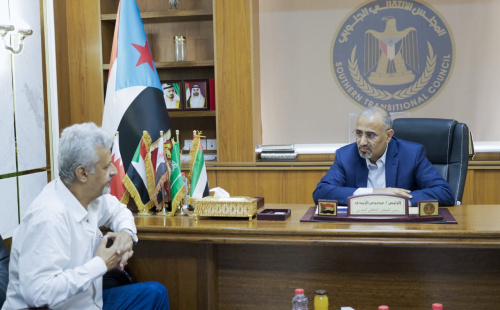 The president Aidarous Qassem Al-Zubaidi, President of the Southern Transitional Council (STC), on Wednesday, met Dr. Aidarous Mohsen Al Yahari, head of the Revolutionary Movement Council (RMC), and the meeting discussed the exerted efforts by all southern forces and components to the Southern Unity, strengthening the southern national cohesiveness, and protecting the gains that have been achieved for people of the South with the help and sacrifices of its loyal people.

In the meeting, the president Al-Zubaidi lauded the tireless efforts that have been made by the southern national forces, foremost of which is the RMC, to the southern cohesiveness and unifying various visions and ideas in a way that serves the public interest of the South and bring victory for its just cause.

The president Al-Zubaidi reiterated that the southern cohesiveness is a firm approach of the STC, and all southerners are heading to achieve one common goal, even though the paths and vision are varied, noting what the South is currently passing-through requires a national step, towards more coordination, cooperation and partnership, from the firm principle that the South will only be with and for all its people.

For his part, Dr. Al Yahari praised the immense efforts made by the president Al-Zubaidi to fulfill the southern unity and create a national code of honour to ensure achieving the common national goals, foremost of which is the goal of restoring and building the Southern Federal State on its entire national soil with its internationally recognized borders on May 21, 1990.