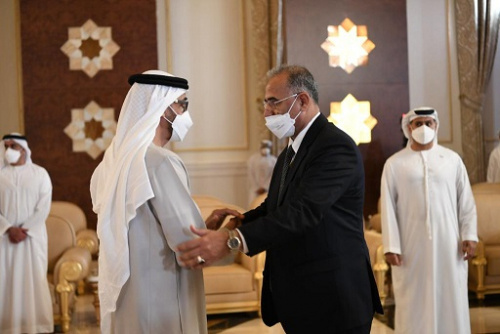 The president Aidarous Qassem Al-Zubaidi, President of the Southern Transitional Council (STC), Deputy head of the Presidential Leadership Council, on Monday, attendingly expressed his condolences to his official brother, His Highness Sheikh Mohammed Bin Zayed Al Nahyan, the president of the United Arab Emirates (UAE), on the passing of the late Sheikh Khalifa bin Zayed Al Nahyan, may Allah bestows His mercy on him,

During his meeting, the president Al-Zubaidi, valued with His Highness Sheikh Mohammed bin Zayed, in the UAE capital, Abu Dhabi, the true brotherly positions of the late Sheikh Khalifa Bin Zayed, and his continuous support to our country in many various fields, that will surely be remained a source of pride to all people of the South, praying to Allah the Almighty to bestow on him His vast mercy and abode him in His paradise.

In context of the meeting, the president Al-Zubaidi offered congratulations to his highness Sheikh Mohammed Bin Zayed Al Nahyan on the occasion of being elected as the president of the United Arab Emirates (UAE), by the Supreme Council of the Union, praying to Allah the Almighty to guide and lead his footsteps in leading the course of construction and prosperity for the State and people of the UAE towards further advancement and development.