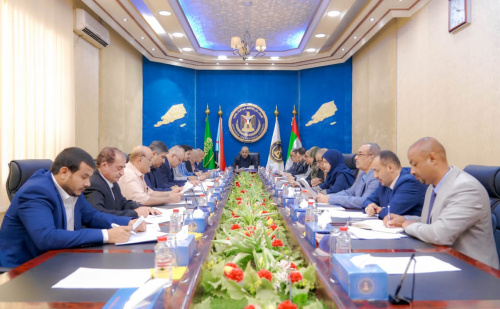 The presidency of the Southern Transitional Council (STC) held its periodic meeting, on Saturday, chaired by the president Aidarous Qassem Al-Zubaidi, President of the STC, Supreme Commander of the Southen Armed Forces,

Initially, the meeting that was also attended by several STC's ministers in the power-sharing government, stood a tributing mimute to read Al-Fatiha for the soul of the deceased of the nation his highness Sheikh Khalifa Bin Zayed Al Nahyan; the president of the brotherly United Arab Emirates (UAE), who died yesterday, on Friday, after a lifetime of granting and outstanding achievements.

In its meeting, the presidency stood before the latest economic and political developments in governorates of the South, in light of reports submitted by the STC's ministers in the power-sharing government, the Decision-Making Support Center and the General Directorate for Foreign Affairs (GDFA), the presidency of the STC has listened, in its meeting, to a matrix of policies that have been approved by the power-sharing government, in its past meeting, to be accomplished in accordance with directives of the Presidential Leadership Council, in the same context, stressing on importance of making urgent economic reforms by the power-sharing government to be able to assume responsibilities and assigned tasks; represented in providing services, boosting revenues, finding sustainable solutions to the continuous collapsing of the local currency exchange rate, controlling and inspecting prices inflation, finding quick solutions to crisis of electricity during this current summer; especially in the coastal areas.

Politically, the presidency stood before the latest political developments both in the regional and international levels in light of a report submitted by the GDFA which included the prominent fulfillment achieved by the STC on the abroad level, as well as the latest developments of concern with the political process led by the Special envoy of the Secretary General of the UN to achieve peace in the entire region.

To the end of its meeting, the presidency touches on the remaining topics on its agenda; at its top is the latest organizational and security developments, and took necessary measures in such regard.