Al-Jaadi Honours Children Initiative of Eid Felicitations to Traffic and Security Men, in the capital, Aden.

Al-Jaadi Honours Children Initiative of Eid Felicitations to Traffic and Security Men, in the capital, Aden. 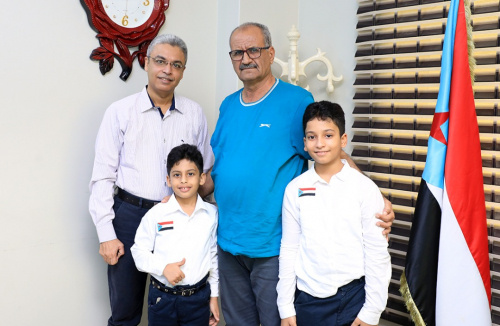 Mr. Fadhl Mohammed Al-Gaadi, Deputy Secretary-General of the General Secretariat of Presidency of the Southern Transitional Council (STC), on Tuesday, at headquarters of the General Secretariat, in the capital, Aden, honoured two children; Abdullah Saleh Al-Jaro (9 years) and Abdullah Marouf Al-Jaro (10 years) for their initiative to give Eid presents to traffic and security men in Security Checkpoints in the capital, Aden, during the blessed Eid Al-Fitr.

In the honouring, which was attended by Mr. Al-Kuraihi Kana'an, deputy head of Youth and Students Department in the General Secretariat, Ms. Yasmine Musaed, deputy head of Woman and Child Department, and Mr. Saleh Al-Jaro, in charge of the two children’s initiative, Al-Jaadi praised the personal initiative to present Eid gifts, which boosted morale of traffic and security men, and motivated them to perform their duties during Eid period, looking forward to imitating these two children and their initiative as a good role model in appreciating those who work to serve people, wishing them all success and a bright future.

In turn, Mr. Saleh Al-Jaro and the two children; Abdullah Saleh and Abdullah Maarouf, expressed their happiness and appreciation for this honour and nice gesture from the STC, offered thanks to the Deputy Secretary general, and emohasized such honour motivates them to make more efforts in implementing such actions.