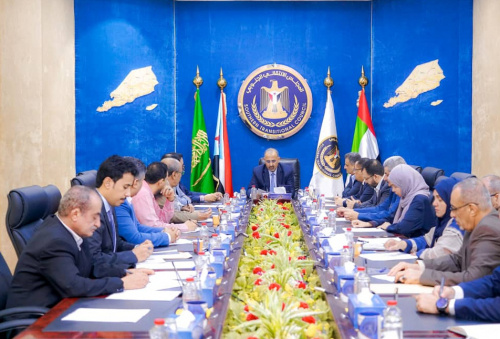 The Presidency of the Southern Transitional Council (STC) held its periodic meeting, on Thursday evening, chaired by the president Aidarous Qassem Al-Zubaidi, President of the STC, Supreme Commander of the Southen Armed Forces,

At the beginning of the meeting, the presidency stood before the political and military developments in the South in light of the major changes that resulted from Riyadh consultations. In this context, the presidency underpinned the outcome of Riyadh consultations, stressed the STC's commitment to partnership with all the forces that participated in the consultations sponsored by the General Secretariat of the Cooperation Council for the States of the Arab Gulf (GCC), the presidency stressed the STC’s adherence to the Southern national fundamentals and striving with all the patriotic people of the South to strengthen the Southern alignment in a way that ensures all concerted efforts to achieve aspirations of the people of the South and enhance partnership with the official brothers in Arab coalition led by the Kingdom of Saudi Arabia and the United Arab Emirates, and with all forces opposing the Houthi militias and Iranian expansionist plans in the region.

The presidency called on all the Council’s bodies and leaders both in central and local formations, to intensify efforts, work hard to perform the outcomes of Riyadh consultations, and push towards addressing all issues related to livelihood of the people in the South, foremost of which is providing services, stopping currency collapsing, securing regular payment of salaries,  launching development and reconstruction process in all governorates of the South.

The presidency of the Council also expressed its support to the efforts of the Presidential Leadership Council aimed at addressing all imbalances and consolidating pillars of security and living stability, stressed the need to rapid action to complete implementing provisions of Riyadh Agreement, including the appointment of governors and security directors for governorates of Hadramaut, Mahra, Socotra, Lahj, Abyan, and Al Dhale’a, as well as transfering the military forces to the battlefronts, restructuring the ministries of defense and interior, restructuring the Central System for Control and Accountability, and the Anti-Corruption Commission, and reforming the economic and financial system.

In the meeting, the presidency renewed its support and assistance to efforts of the local and security authorities in the capital, Aden, led by Mr. Ahmed Hamed Lamlas, Secretary-General of the presidency of the Council, Minister of State, Governor of the capital, Aden, calling on the power-sharing government to provide all aspects of support to succeed its efforts to enhance security and stability, provide services and start the process of development and reconstruction. At the end of its meeting, the presidency stood before a number of security and military issues listed on its agenda and took necessary measures in such regard.