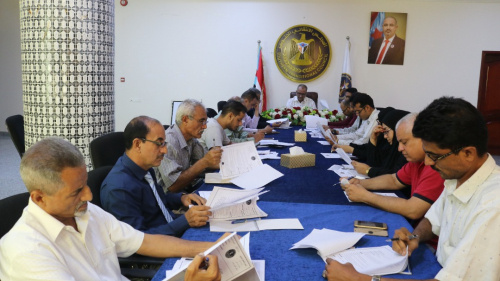 The General Secretariat of the Presidency of the Southern Transitional Council, on Wednesday, held its periodic meeting, headed by Mr. Fadl Mohammad Al-Jaadi, Deputy Secretary-General.

At the beginning, the meeting stood for a minute to read Surat Al-Fatihah for the martyrs of the criminal terrorist incident, which targeted Mr. Ahmed Hamed Lamlas, Secretary-General of the General Secretariat of the Presidency of the Southern Transitional Council, Governor of the capital, Aden, and Major General Salem Al-Socotri, Deputy Secretary-General, Minister of Agriculture and Fisheries, early this week in Hujaif of Aden the capital, which resulted in a number of martyrs and wounded, asking Almighty Allah to bestow mercy and forgiveness on them, and to grant the wounded a speedy recovery.

The meeting also listened to a report submitted by the Administrative and Financial Department, which dealt with the level of organizational and administrative discipline through the activities carried out by the departments of the General Secretariat and the administrations in local leaderships for the third semester of the year 2021 AD.

The meeting dealt with the economic situation in the south, and in the capital, Aden, in particular, and the effects of the devaluation of the local currency exchange rate on the economic aspects, and the negative repercussions of this on the lives and livelihoods of citizens, stressing the need to find quick and appropriate solutions to stabilize the exchange rate, and work to stop the currency collapse.

The meeting was started by reviewing and approving the report of the activities of the General Secretariat departments during the past week, as well as the minutes of its previous meeting.