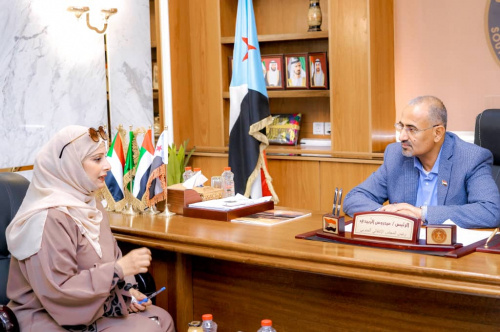 The meeting discussed the cultural situation at all levels in the capital, Aden, and the difficulties that prevented reaching the desired development in the cultural aspect, and the most important ways that would advance the cultural reality in Aden.

In the meeting, President Al-Zubaidi stressed that the Southern Transitional Council pays great attention to the cultural aspect, given that culture is one of the main and solid pillars in building the desired federal state of the south.

President Al-Zubaidi noted that the awareness of any society is measured by the level of its culture, as one of the most important aspects of life in any society, pointing out that the south in general, and the capital Aden in particular, were occupying advanced levels in culture, but the deliberate practices of the regime of Sana'a against the culture of the south prevented its continuity.

In turn, the Director of the Culture Office in the capital, Aden, Randa Akbour, expressed thanks to President Al-Zubaidi for his welcome, as well as for the great interest he pays to the culture.

In conclusion, Akboor presented to President Al-Zubaidi a full explanation of the level of work of the Culture Office in the capital, Aden, and the difficulties it faced during the previous period, informing President Al-Zubaidi about the most important works that the office intends to implement in the coming period.