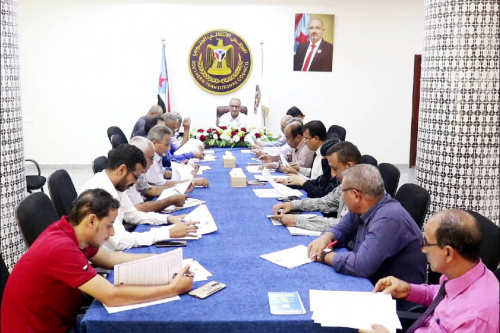 The General Secretariat of the Presidency of the Southern Transitional Council held on Monday, its periodic meeting, headed by Mr. Fadl Mohammad Al-Jaadi, Deputy Secretary-General.

In its meeting, the secretariat reviewed the economic scene report submitted by the Economic Department, which dealt with the reasons for the continued depletion of resources and revenues in the capital, Aden, and the withdrawing hard currency by those controlling the financial policy, and transferring it to the governorates under the control of the terrorist Houthi militia, in light of the suffering of the capital, Aden, and the rest of the governorates of the South with deteriorating services, and the no-payment of salaries to a large segment of the people of the South.

The report touched on the economic damage as a result of the torrential rains that most of the governorates of the South witnessed, which caused the erosion of agricultural lands and the destruction of some roads and bridges, and what the coasts of Aden were exposed to as a result of a sinking ship loaded with oil materials, and the dangers of the presence of many dilapidated ships that may close the entrance to the port of Aden, and disrupt the navigation, and the pollution of marine environment in the coasts of the capital, Aden, it will cause if it sinks.

The meeting discussed the job discipline report presented by the Administrative and Financial Affairs Department, which reviewed the level of discipline for the staff of the secretariat departments during the month of July for the year 2021, as well as the most prominent observations related to the nature of the discipline of the secretariat employees.

The meeting also reviewed a report on the performance of the political department for the first half of the year 2021, which included the tasks accomplished by the department and the tasks that were implemented during this period.

The meeting had reviewed the report of the activities of the general secretariat departments during the past week, as well as the minutes of its previous meeting and approved it.