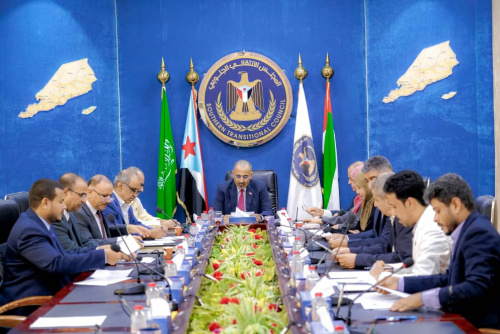 The Presidency of the Southern Transitional Council held on Thursday, its periodic meeting in the capital, Aden, headed by President Aidarous Qassem Al-Zubaidi, the President of the Council.

The meeting was attended by the ministers of the Transitional Council in the parity government, in which the Presidency of the Council reviewed the minutes of its previous meeting, and its achieved outcomes.

The Presidency praised the results of the meeting of President Aidarous Al-Zubaidi with the Economic Committee and the Southern Money Exchangers Association, stressing the need to recover the deteriorating economic situation throughout the governorates of the South.

The Presidency affirmed its support for the sons of Hadramout in general, and the sons of Seiyun in particular, in their refusal to hold sessions of the Yemeni Parliament in Seiyun, especially in light of the difficult conditions that the people of the governorate are experiencing.

The Presidency stressed the firm position of the Southern Transitional Council, which calls for the return of the parity government between the south and the north to the capital, Aden, and the danger of its continued absence without justification, and the serious economic consequences that have ensued, foremost of which is the non-payment of salaries and the no providing of basic services, pointing to the necessity of moving forward with the implementation of the remaining provisions of the Riyadh Agreement, in full without any selectivity, foremost among which is the formation of the joint negotiating delegation for the comprehensive political process sponsored by the United Nations.

After that, the Presidency of the Council discussed the briefing provided by the Head of the General Directorate of Foreign Affairs of the Southern Transitional Council on a number of issues related to developments and events in the southern arena during the past period, in addition to recommendations aimed at enhancing the role and presence of the Council externally.

The head of the General Directorate of Foreign Affairs of the Council reviewed the foreign political developments, and the repercussions of the various local developments on the regional and international situation in the relevant files.

At the conclusion of its periodic meeting, the Presidency discussed and approved a number of decisions regarding some of the Council's bodies.