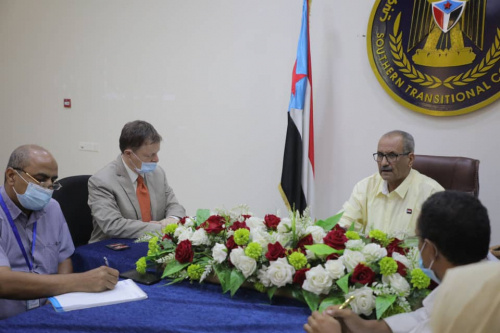 The Deputy Secretary-General of the Presidency of the Southern Transitional Council, Mr. Fadl Mohammad Al-Jaadi, met on Thursday, in the capital, Aden, with the Representative of the United Nations High Commission for Human Rights (UNHCR) in Yemen, Mr. Reno Marie Detal, in the presence of Mr. Mohammad Al-Ghaithi, head of the General Directorate of Foreign Affairs of the Southern Transitional Council.

The meeting discussed the semi-annual human rights report issued by the Human Rights Department at the General Secretariat on human rights situation and the violations monitored in the South.

In the meeting, Al-Jaadi welcomed the UN official, thanking him for paying attention to the file of human rights and violations committed against southerners, and submitting them to the UN authorities.

Al-Jaadi stressed that Southerners are the most who have experienced violations since 1990, through the summer of 94 war, until now, and this was manifested in excluding them, and looting their lands and wealth, and the destruction of their identity.

Al-Jaadi added, "Therefore, it is natural for Southerners to be more keen on adhering to human rights."

Al-Jaadi continued, "But there are those who are trying to distort and overturn the facts and exploit the file of human rights and the humanitarian aspect for political purposes, which is an immoral act."

Al-Jaadi continued, in the same context, there is no clearer evidence of the exploitation of the humanitarian file in terms of suspending salaries, especially for members of the southern army, and appointing a public prosecutor from outside the judiciary, which disrupted the work of the judiciary, as well as the poor services and systematic currency manipulation.

Al-Jaadi stressed the importance of cooperating with the High Commission for Human Rights to enhance aspects of human rights and limit violations.

For his part, Dr. Abdulaziz Hadi, Deputy Head of the Human Rights Department presented a full explanation about the half annual report, stressing the accuracy of the information included in the report in terms of verification, monitoring and documentation.

He expressed his department's readiness to form a joint team with the Commission to closely monitor the human rights situation in the capital, Aden, and the liberated areas.

Dr. Abdulaziz, expressed thanks to the Representative of UN High Commission for Human Rights, for his interest in the report and the facts it contained, and for discussing it in a serious and objective manner.

For his part, Mr. Reno thanked the Deputy Secretary-General and the Human Rights Department for paying attention to the human rights situation through the effort to prepare periodic and regular human rights reports and monitor human rights violations, praising their cooperation in overcoming the difficulties so that the Commission can play its required role in the capital, Aden, and the liberated areas.

At the end of the meeting, the Representative of the United Nations High Commission for Human Rights wished for effective partnership with the Southern Transitional Council in consolidating security that guarantees human rights, limiting violations, and for holding periodic meetings to maintain permanent and effective monitoring of human rights.