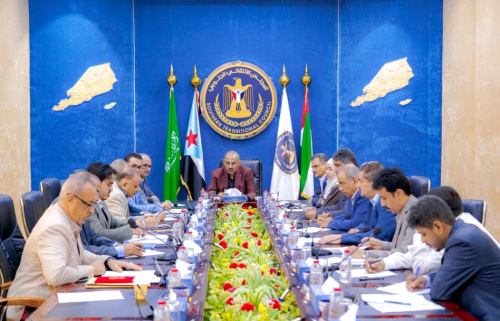 The Presidency of the Southern Transitional Council held on Thursday, its periodic meeting, in the capital, Aden, headed by President Aidarous Qassem Al-Zubaidi, the President of the Council.

The Presidency of the Council called on the prime minister and ministers of the government of parity to quickly return to the capital, Aden, to meet the demands and needs of citizens, to fulfill its obligations stipulated in the Riyadh Agreement, and to stop the collapse of the economy, and the deterioration of services that the simple citizen bears the catastrophic consequences of it.

The Presidency of the Council also listened to clarifications from the Governor of the capital, Aden, the Secretary-General of the Presidency of the Council, Mr. Ahmed Hamed Lamlas, about the Saudi grant, and the arrival of a ship of oil derivatives to the capital, Aden, in the coming days, to alleviate the burdens suffered by the people of the liberated governorates of the South, expressing thanks for the continuous efforts of the Kingdom of Saudi Arabia.

The meeting discussed the report submitted by the head of the General Directorate of Foreign Affairs on a number of issues related to developments and events in the southern arena during the past period, as well as recommendations aimed at strengthening the role and presence of the Southern Transitional Council externally.