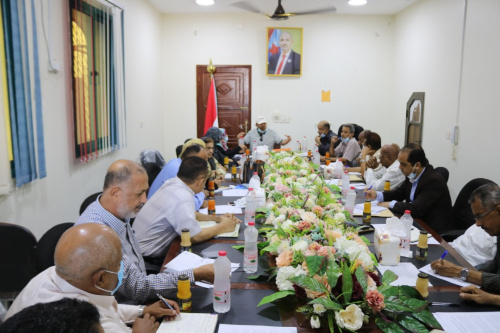 The Supreme Economic Committee of the Southern Transitional Council held on Wednesday, its periodic meeting chaired by Dr. Mohammad Ali Matash, the Chairman of the Committee.

The meeting was started by standing a minute of mourning and reciting Surat Al-Fatiha for the spirit of the deceased, Dr. Hassan Saleh, the member of the Supreme Economic Committee.

After that, the meeting reviewed the most prominent economic and service issues on the national arena, foremost of which are the problems of electricity, water, hygiene, and randomization, in addition to a number of economic visions for the development of the agricultural and fish sectors.

The meeting dealt with the latest developments related to the economic situation and its effects on the living conditions of citizens, and proposals and possible solutions to overcome them.

The Chairman of the committee stated that all visions, which were subject to discussion, would be submitted to the leadership of the Council for circulation to the competent authorities to contribute to the advancement of the current economic and service sectors that exhausted citizens.