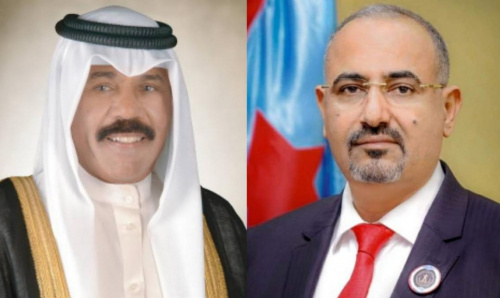 The President of the Southern Transitional Council, President Aidaroos Qasim Al-Zubaidi, sent a congratulatory message to the Emir of the state Kuwait, His Highness Sheikh Nawaf Al-Ahmad Al-Jaber Al-Sabah, and the brotherly Kuwaiti people, on the occasion of the 60th National Day and of the 30th  anniversary of Liberation.

President Al-Zubaidi expressed his congratulations to the brotherly Kuwaiti leadership, government and people on these two occasions, wishing its return to the people of Kuwait and their aspirations for further development and prosperity being fulfilled.

President Al-Zubaidi praised the successes achieved by Kuwait in which took it to advanced stages befit to it and its honorable history.

The President of the Transitional Council pointed to the distinguished historical bilateral relations that bind our Southern people with the dear Kuwaiti people, wishing that the two peoples' relationship in the coming period will witness further development and growth, praising all aspects of the generous support that Kuwait provided to our country over the past decades, and its standing by our people in various stages.