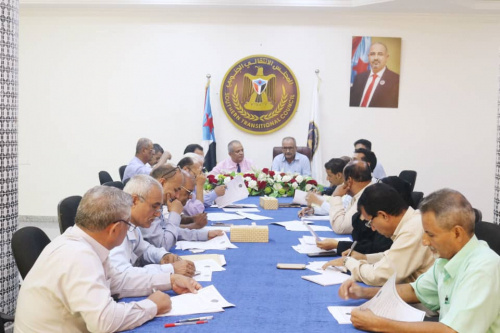 The General Secretariat of the Presidency of the Southern Transitional Council held on Monday, its periodic weekly meeting at the headquarters of the General Secretariat in the capital, Aden, headed by Mr. Fadl Mohammad Al-Jaadi, Deputy Secretary-General, and in the presence of Mr. Lotfi Shatara, member of the Presidency of the Council, Vice Chairman of the National Assembly.

The meeting reviewed the visit of the President of the Transitional Council and his accompanying delegation to the Russian Federation and the important outcomes that resulted from the visit, praising the success of the Council in consolidating its relationship with international community and countries associated with international decision-making.

The meeting affirmed the Transitional Council’s vision of restoring its southern federal state that includes all segments of the people of the South, through the full partnership of all Southern regions to achieve the aspirations of the Southern people to restore their Federal State.

The meeting reviewed the political scene report submitted by the political department, which reviewed the effects of the visit of President Aidaroos Al-Zubaidi and his accompanying delegation, to the Russian capital, Moscow, and its resulting effects locally and internationally, referring to the great interest in the relationship between the Russian Federation and the Transitional Council .

The political report also dealt with developments of the visit of the European delegation of ambassadors to the capital, Aden, and their message to the government, in addition to the appointment of a special American envoy to Yemen and other prominent issues in the political arena.

The meeting discussed the performance report of the Women and Child Department, as well as the Martyrs and the Wounded's' from the beginning of the year until the date of the meeting, and the most prominent tasks that have been implemented by the two departments during this period, and the difficulties that the departments faced, and the means and treatments that were made to overcome those difficulties, besides their work plans in the same period.

The meeting had reviewed the reports of the weekly activities of the General Secretariat departments, the work carried out during the past week, and the achievements accomplished within the framework of their duties during the past period, the meeting also reviewed its previous minutes and approved it.