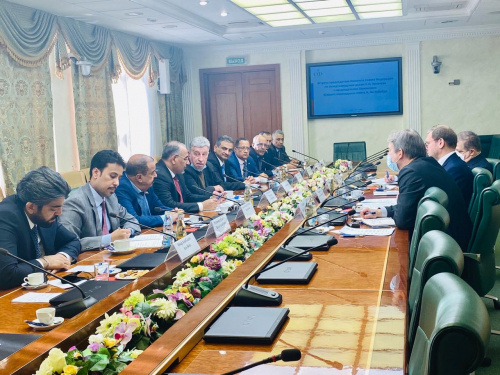 The President of the Southern Transitional Council, Supreme Commander of the Southern Armed Forces, President Aidaroos Qasim Al-Zubaidi, and his accompanying delegation met on Tuesday, at the Russian Federation Council headquarter with Konstantin Kosachev, Chairman of the International Affairs Committee of the Federation Council, in the presence of the Vice-Chairman of the International Affairs Committee of the Council and officials from the Federation Council, within the framework of the program of the third day of President Al-Zubaidi's official visit to the Russian Federation.

After the Russian side welcomed the president and his companions, President Al-Zubaidi expressed his thanks and his accompanying delegation to the friends in the government of the Russian Federation for the invitation and warm reception, noting the historical relations between Moscow and Aden, and the common files and interests that need to intensify coordination and communication in a way that enhances the relationship, and contributes to achieving the aspirations of the people of the south, and the opportunities for peace and stability in the region.

President Al-Zubaidi referred to the Legislative Council in the capital Aden in the past, and the similar historical experience that reflects a long-established civil foundational history of Aden, the city of peace and culture, stressing the Council's intention to restore this model in its honorable form.

President Al-Zubaidi pointed out that the region needs regional and international cooperation and support to assist the South in the main files of common interest in Bab al-Mandab Strait and the Gulf of Aden, and shipping lines, in addition to the anti-terrorism file and the political and economic file.

The President also stressed the necessity of the presence of the South as a main party in the political process sponsored by the United Nations, stressing the Council’s adherence to the national goals and legitimate aspirations of the people of the South, and on top of that is their right to self-determination, restore their identity, and build their independent state with full sovereignty.

For his part, Konstantin Kosachev expressed his welcome to the visit of President Al-Zubaidi and his accompanying delegation to the Russian Federation, appreciating his visit to the Federation Council, and stressing the distinguished historical relationship with the South, and welcoming parliamentary communication and cooperation between the two countries.

In the meeting, positive and fruitful discussions took place on a number of related files and issues, and souvenirs were exchanged between the two sides.