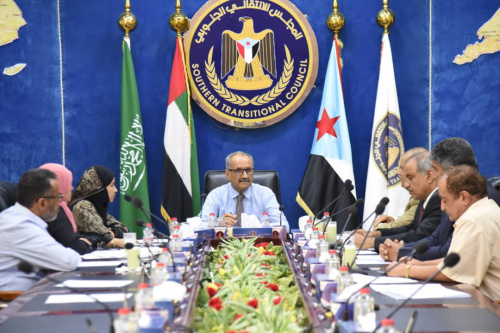 The Presidency of the Southern Transitional Council held on Sunday, its weekly meeting, headed by Mr. Fadl Mohammad Al-Jaadi, Deputy Secretary-General of the General Secretariat of the Presidency.

The meeting reviewed the arrangements made by the General Secretariat to implement the event of Southern Reconciliation and Tolerance on January 13, 2021, as the Presidency sent open invitation to attend the event.

On the general issues, the Presidency stressed the importance of the government to accelerate the adoption of what is necessary to restore the value of the local currency and called on the Arab Coalition to actively intervene for the success and continuity of its measures.

The meeting stressed the need for the government to implement the priorities of its tasks specified in the Riyadh Agreement, foremost of which is the disbursement of the salaries of the military and security forces and the start of serious and early treatment of the citizens' needs for the coming summer of electricity and water to avoid recurring crises of continuous black outs, which was due to the absence of the government's role in addressing them during the past years, reiterating the importance of everyone to cooperate to help the 50/50 government to implement its tasks, and to support the leadership of the Transitional Council in all its central and local authorities in the governorates to implement these tasks and other tasks assigned to it in accordance with the Riyadh Agreement.

The Presidency renewed its request to the Prime Minister to direct to stop practices that violate the law, including the suppression, kidnapping and pursuit implemented by the Brotherhood's military and security militias in Shabwa governorate, against the Transitional Council leaders, as well as the social figures and tribes that disagree with their opinions, warning of the risks of its continuation.

The Presidency also previewed a number of periodic reports on other issues and took the necessary measures in this regard.