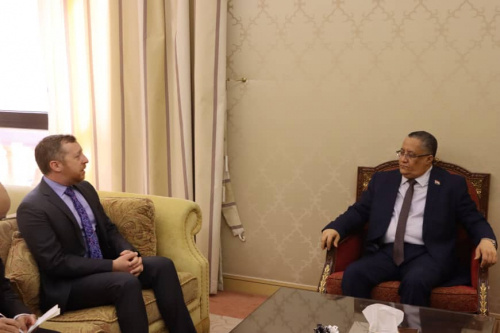 The member of the Presidency of the Southern Transitional Council, head of the Negotiations Affairs Unit, Dr. Nasser Al-Khobaji, received on Wednesday, at his residence in the Saudi capital Riyadh, the Acting Deputy of US Ambassador and the political and economic official at the US Embassy to Yemen, Mr. Christopher Deutsch

In the meeting, the two parties reviewed the most prominent emerging issues and files, foremost of which is the formation of a government of power-sharing between the south and the north, and the completion of the implementation of the military arrangements in Abyan and Aden, and ways to alleviate the suffering of citizens and remove the consequences of the war and its repercussions, in which Dr. Al-Khobaji expressed the Council’s appreciation for the efforts made by the Kingdom of Saudi Arabia, and the United Arab Emirates to implement the Riyadh Agreement, and to enhance the capabilities to confront challenges and dangers, especially the Houthi militia, terrorist and extremist groups.

Dr. Nasser Al-Khobaji stressed that the announcement of the formation of a power-sharing government between the south and the north is an important point on the road to achieve security and stability in the South and Yemen, calling on the government to devote itself to the priorities of the stage related to the livelihood and life of the citizens in terms of services, electricity, water, health, education and stability of the economic and security situation, and work to mobilize efforts to confront the Houthis militia and terrorist organizations, combating corruption, and regional interventions hostile to the Arab project.

Al-Khobaji pointed out to the necessity to expedite the implementation of the rest of the terms of the Riyadh Agreement, foremost of which is the implementation of the articles related to organizing the mechanism of collecting oil, customs and tax resources and depositing them in the Central Bank in the capital Aden to enhance the capabilities of the state and facilitate the financial cycle, thus ending the recurring financial crises facing the country, and urging efforts to rebuild institutions of the state, in addition to appointing provincial governors and security directors, and implementing military and security arrangements in the rest of the southern governorates, as stipulated in the Riyadh Agreement, as well as forming a joint negotiating delegation, and reconfiguring the economic bodies represented by the Supreme Council for Economy, the National Anti-Corruption Authority and the Central Organization for Control and Accountability.

Dr. Al-Khobaji praised the role the United States is playing to combat terrorism and piracy, and its efforts to bring peace and end the war in our country, and to address the crises in the Middle East region in general.

For his part, Mr. Christopher Deutsch praised the response of the Southern Transitional Council and its constructive cooperation to implement the mechanism for accelerating the Riyadh Agreement, forming the new government and implementing military arrangements, hoping that the government would quickly return to Aden and guarantee to alleviate the suffering of the citizens and address the economic crisis, in a way that meets the steady improvement in recent prices and the riyal exchanged against other currencies.