Al-Jaadi: Our rights to live, freedom, and independence will not be taken away from us

Al-Jaadi: Our rights to live, freedom, and independence will not be taken away from us 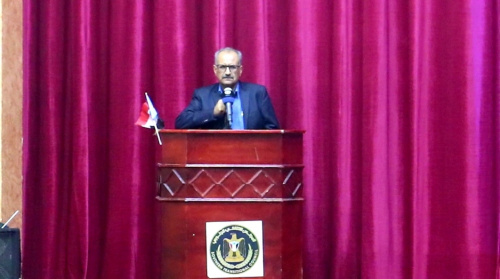 The Deputy Secretary-General of the Presidency of the Transitional Council, Mr. Fadl Mohammad Al-Jaadi,  affirmed that "our rights as southerners to live, our rights for freedom and independence are rights that no one can take away from us, and we will live with the steadfastness of our people."

This came in the ceremony organized by the Human Rights Department at the General Secretariat of the Presidency of the Southern Transitional Council on Thursday, at Hafoon Theater in the capital Aden, on the occasion of the 72nd anniversary of the Universal Declaration of Human Rights, in presence of Dr. Mona Bashrahil, Dr. Soheir Ali Ahmed, and Mr. Lotfi Shatara; members of the Presidency of the Transitional Council, and Lawyer Zikra Matooq, Head of Human Rights Department, and a number of the capital officials and heads and deputies of the General Secretariat departments, jurists, academics, intellectuals, community activists, and representatives of human rights organizations and civil society organizations.

Al-Jaadi added, "We are here, in the south,  share with the world celebrating this occasion, and we have been fighting for our rights since the war of 7 July 1994, and our heroes and our martyrs are still scarifying their blood and souls for our rights till this day, and unfortunately the world's attention to our rights is still almost absent."

Al-Jaadi pointed out that "the south is experiencing decades of instability, due to the barbarism of war merchants, but today, with the steadfastness of our men and the determination of our leadership, we have been able to achieve diplomatic victories, even if they were reflected in economic and service wars, but they will not discourage the steadfastness of our people."

Al-Jaadi added: "We say to the world that we support the rights of human around the world from all nationalities and religions, but we are with regaining our rights first, and whoever does not recover his rights cannot defend the rights of others."

Al-Jaadi concluded his speech by commending the Department of Human Rights for reviving this occasion and for the effective participation of the Cultural Department with it, and for their efforts to establish and make this celebration a success.

And Dr. Abdulaziz Ali Hadi, Vice President of the Human Rights Department, delivered a speech about the keenness of the Human Rights Department in the General Secretariat to celebrate international events to convey the reality of the southern homeland and the abuse and injustice that has been exposed to them since 1990, and during and after the events of 2015, indicating the department's role in monitoring and following up the violations that occur in the south and what the people are subjected to, and its work to communicate these violations to the world, expressing the department's condemnation of the international community's reaction by its silence of these violations.

The ceremony included presenting a poem, and a video clip about the Human Rights Department in the General Secretariat of the Presidency of the Council and the process of its achievements, and presenting acting play for director Ahmed Yafei, entitled “Rights on Papers,” which witnessed great interaction from the audience and won the admiration of the attendees. 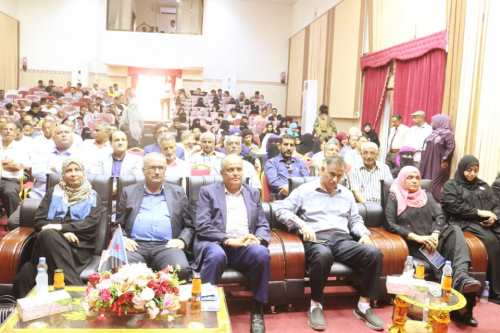