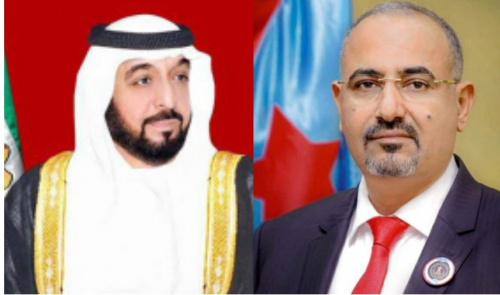 In the telegram, President Al-Zubaidi expressed his sincere congratulations to the leadership and the brotherly people of the Emirates on this great occasion that comes this year in light of the continuing achievements made by the state in various fields.

President Al-Zubaidi noted that the progress achieved in UAE represent a source of pride for our southern people and all Arabs, as well as for all lovers of the values ​​of goodness and humanity, which represent the UAE as its first beacon, wishing the leadership and government of UAE good health, happiness and steady success.

In the telegram, President Al-Zubaidi emphasized the strength of the distinguished fraternal relationship between the peoples of the South and UAE, which dates back many decades.

President Al-Zubaidi affirmed the pride of the people of the south in the sincere and generous fraternal stances of the United Arab Emirates at their side, which they expressed in various stages, the most recent of which was through its distinguished role in the battle against the Houthi militia during its aggression against the south, a battle in which southern and Emirati blood mixed in the fields of honor and heroism to liberate the south, and expel the invading militias, and bury their destructive project.

President Al-Zubaidi prayed to Allah Almighty to return this occasion for the state and people of UAE with more development and elevation factors to be achieved for it.