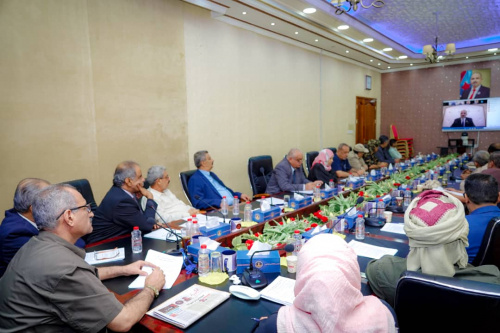 The President of the Southern Transitional Council, Supreme Commander of the Southern Armed Forces, President Commander Aidaroos Qasim Al-Zubaidi, chaired on Sunday, the periodic meeting of the Council's Presidency, via video call from the Saudi capital, Riyadh.

The meeting valued the heroics of our southern armed forces on all fronts, to defend the existence of the southern homeland and protect its national gains, stressing the path and goal that the martyrs walked on and offered their lives for, which is liberation, independence and the restoration of the southern state with full sovereignty.

President Al-Zubaidi, together with the members of the southern negotiating delegation who participated in the meeting, briefed the attendees on the results of the ongoing discussions to form a parity government between the south and the north in accordance with the requirements of the Riyadh Agreement that was sponsored by the brothers in the Kingdom of Saudi Arabia.

President Al-Zubaidi affirmed that the Transitional Council has completed providing all that is required of it to make the mechanism to accelerate the implementation of the Riyadh Agreement, pointing out that the international community and the five permanent members of the Security Council understand and are aware of all steps in this regard, and who is the party trying to obstruct the implementation.

After that, the meeting discussed in detail the draft media discourse that must be adhered to in the Council’s official media, as well as the report of the Presidency, which is tasked with dealing with the problems of the Council’s local leadership in Abyan governorate, and took the necessary actions regarding it.

The meeting also listened to the weekly activity report of the General Secretariat and its departments, the National Assembly and its committees, as well as the results of members ’participation in seminars and workshops held during the past week, in addition to some other dispersed ones, and took the necessary measures in their regard.

In conclusion, the Presidency of the Southern Transitional Council extended its congratulations to our southern people at home and abroad on the occasion of the 53rd anniversary of the National Independence Day, the glorious 30th of November, calling on all of our southern people to actively participate in the festive activities that all southern governorates are witnessing on this great occasion.