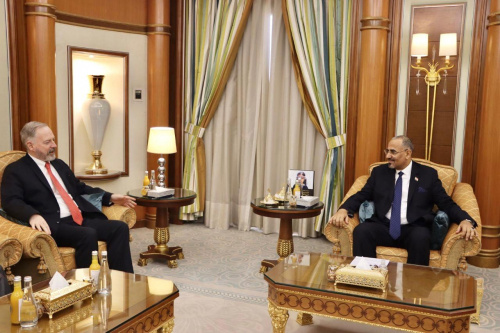 The President of the Southern Transitional Council, Supreme Commander of the Southern Armed Forces, President Aidaroos Qassem Abdulaziz Al-Zubaidi, received at his residence in the Saudi capital Riyadh on Wednesday, the Ambassador of the United States of America to Yemen, Mr. Christopher Hanzel, and the political official of the embassy, ​​Mr. Chris Deutch.

President Al-Zubaidi also reviewed the development of the military situation on the battlefronts in front of the Houthi militia, referring to the dangerous military escalation carried out by political forces under the umbrella of the Yemeni government in Abyan with the aim of thwarting the Riyadh Agreement, stressing the commitment of the southern forces to restraint and the defense stance until today, adding that the Council’s commitment Supporting the calm stems from the Council’s concern that the humanitarian and living situation does not deteriorate.

President Al-Zubaidi affirmed the Council's position in support of the comprehensive peace process sponsored by the United Nations, denouncing the terrorist acts carried out by the Houthi militia, which represented targeting economic facilities and civilian objects in the Kingdom, referring to the strategic partnership with the United States and the Coalition countries in combating terrorism and extremism.

President Al-Zubaidi expressed his deep appreciation for the efforts made by the United States of America by supporting the efforts of the Arab Coalition led by the Kingdom of Saudi Arabia to implement the Riyadh Agreement and to establish peace.

For his part, the American ambassador expressed his appreciation for the council’s position and its positive engagement in various files, especially with regard to the implementation of the Riyadh Agreement, stressing his government's support for the success of Riyadh’s efforts, stressing the need to accelerate the formation of the new government.