In its periodic meeting headed by Al-Jaadi.. 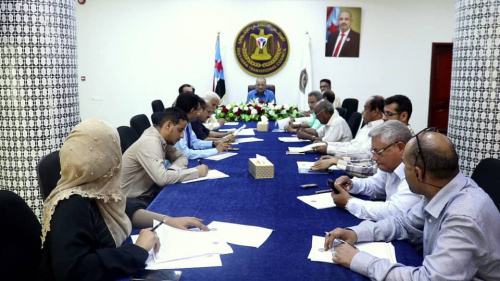 The General Secretariat of the Presidency of the Southern Transitional Council held on Monday, its periodic meeting headed by Mr. Fadl Mohammad Al-Jaadi, the Assistant Secretary-General.

The meeting discussed the most prominent issues on the southern arena, their implications on the citizens and their live, and the related proposals.

The Assistant Secretary-General stressed on the importance of realistically diagnosing issues and giving the rational and intellectual side its place in what can be implemented regarding them, praising the keenness and interest of the Secretariat departments in the issues of the homeland and citizens, stressing on the importance of presenting recommendations and conclusions that take into account the reality in which we live based on reliable sources of information away from emotions and walking step by step to achieve the required goals and the correct assessment to come up with the right actions.

The meeting praised the persistence of the southern armed forces on the fronts and their steadfastness in front of the Houthi militia and the attacks of the Brotherhood terrorist militia that seek to thwart the implementation of the Riyadh Agreement, stressing on what came in the Presidency meeting in this regard.

The meeting reviewed the economic scene report during the past two weeks submitted by the Economic Department, which dealt with the most important current economic issues in the southern arena and their implications for the economic situation in the country. The meeting presented their observations and recommendations related to the issues included in the economic report.

The meeting also discussed the Masses department's performance report for the third semester (July - September 2020), reviewing its performance level and its most important activities in the aforementioned period and the most prominent achievements accomplished during it.

The meeting had reviewed the reports of the activities of the General Secretariat departments during the past week, and previewed the minutes of its previous meeting and approved it.