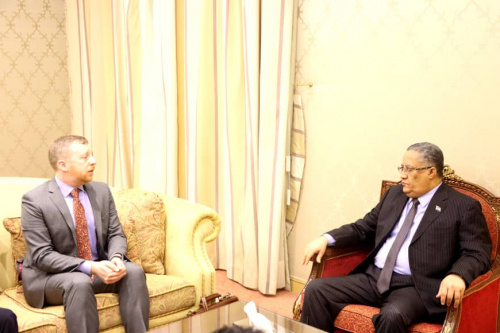 The member of the Presidency of the Southern Transitional Council, Head of the Negotiations Affairs Unit, Dr. Nasser Al-Khobaji, received at his residence in the Saudi capital Riyadh, the political and economic official at the American Embassy in Yemen, Mr. Christopher Deutsch.

In the meeting, the two parties discussed the mechanism for implementing the Riyadh Agreement, stressing on the importance of implementing the agreement and completing the remaining items as soon as possible, appreciating the efforts made by the Kingdom of Saudi Arabia and the United Arab Emirates in this regard.

Dr. Nasser Al-Khobaji reviewed the steps taken by the Transitional Council in order to implement the mechanism to accelerate the Riyadh Agreement, stressing that the Transitional Council had taken the initiative to deliver all plans and scenarios required to form the government and separate the forces in Abyan and transfer them to the fronts, noting to the need for the United States and the international community to intervene to exert the necessary pressure on the Yemeni government to oblige it to implement the agreement and adhere to its contents and provisions in accordance with what it stipulated, affirming the Transitional Council categorical rejection of any violations or breaches of the contents of the agreement and its provisions.

Al-Khobaji noted that the people of the south have been living in extremely tragic conditions for three decades, and are struggling to restore and build their southern state independently of the disaffected forces that have persistently plundered the wealth and capabilities of the South and killed its people, stressing that the people of the South are the ones who to decide their fate according to what international laws have guaranteed .

He pointed out that the Transitional Council attaches great importance to overcoming the tragic conditions experienced by the citizens of the governorates of the liberated south, stressing on the need to accelerate the formation of the new government and ensure it to perform its duties and carry out its tasks on the ground to alleviate the suffering of the citizen.

For his part, Mr. Christopher Deutsch affirmed his country's support and encouragement for the Southern Transitional Council and the government in order to expedite the formation of the new government.