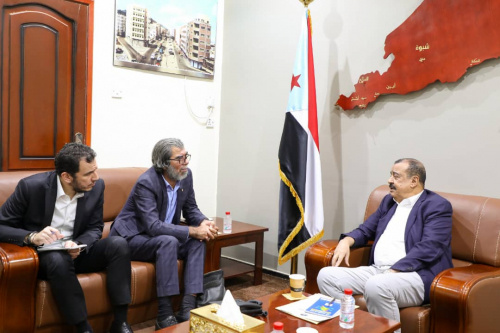 Major General Ahmed Saeed bin Brik, Acting President of the Southern Transitional Council, Chairman of the National Assembly, on Thursday, at the Assembly’s headquarters in the capital Aden, Mr. Marawan Ali, Director of the Office of the UN Envoy Martin Griffiths.

The meeting, which included Mr. Lotfi Shatara, member of the Presidency and Vice Chairman of the National Assembly, discussed developments in the political and military situation in the southern arena and ways to ensure the success of implementing the Riyadh Agreement and the obstacles facing it.

The meeting reviewed the conditions and suffering of citizens in the southern governorates, represented by the deterioration of public services and not deliverying salaries , as well as the suspension of the educational process, in addition to the collapse of the general health situation in it as a result of the practices of the Yemeni government.

In the meeting, Major General Bin Brik reviewed the pre-self-administration stage and its danger, which would have dragged the capital Aden into a new, deliberate internal conflict by some hostile forces, as well as the complete collapse of the public services system, which called on the leadership of the Southern Transitional Council to impose a state of emergency and declare the Self-Administration to get the capital out of the impasse that was besetting it, by working to control security and maintain what remains of electricity, water and hygiene services, as well as health.

Major General Bin Brik indicated that the leadership of the Transitional Council is keen on the success of the implementation of the Riyadh Agreement, indicating that the continued obstinacy and evasiveness by the government is what hinders progress in implementing the agreement.

Major General Bin Brik confirmed that the Transitional Council had presented all the proposals and facilities for the six points of the mechanism for implementing the Riyadh Agreement, but the other party has, until this moment, refused to provide any facilities in order to achieve this.

The Acting President of the Council reviewed the Council’s initiative to conduct prisoners exchange process with the other party in Shokra, in order to show good faith.

Major General Bin Brik stressed on the need for the international community and the Arab coalition to intervene as a result of the bad conditions that worsen day after day on the lives of citizens through the increase in poverty and hunger, the deterioration of economic conditions and the rise in foreign exchange rates against the Yemeni riyal.