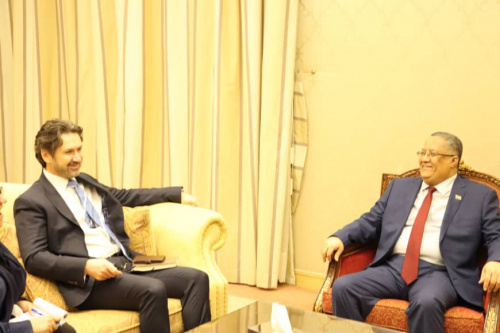 The member of the Presidency of the Southern Transitional Council, head of the Negotiations Affairs Unit, Dr. Nasser Al-Khobaji, received at his residence in the Saudi capital Riyadh, the Deputy British Ambassador to Yemen Mr. Simon Smart.

During the meeting, Dr. Nasser Al-Khobaji reviewed the most important measures accomplished from the mechanism for accelerating the Riyadh Agreement and the steps being consulted about, stressing on the need to accelerate the completion of the separation process between the forces in Abyan and transfering them to the fronts, and forming the government in order to alleviate the suffering of citizens, provide services, paying salaries and addressing the collapse of the local currency especially in light of increasing suffering of citizens as a result of the systematic practices of collective punishment by the government’s beneficial forces who are interested in prolonging the war, they try as much as possible to impede any progress in implementing the Riyadh Agreement, and they seek various means to abort it and drag the south to conflict to achieve their own gains and agendas.

Dr. Al-Khobaji asserted that the Transitional Council always calls for peace and is keen on dialogue, as it is the best way to resolve conflicts, and has options to face any repercussions whenever necessary, and from this point of view it is keen to implement the Riyadh agreement to unify the home front.

Al-Khobaji praised the active and pivotal role that the Kingdom of Saudi Arabia leads in implementing the Riyadh Agreement and unifying the front of the forces opposed to Houthi, and for its support to resolve the dire economic situation in the country.

For his part, the British Deputy Ambassador praised the recent rapprochement and the success achieved in implementing the provisions of the Riyadh Agreement, and urged that more efforts should be made to speed up the implementation mechanisms.