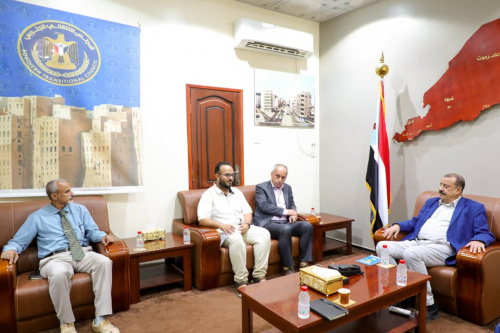 Major General Ahmed Saeed Bin Brik, Chairman of the National Assembly, President of the Self-Administration of the South, met on Sunday at the Assembly’s headquarters, Mr. Migo Terzian, Head of MSF and his companions.

The meeting that included Dr. Mona Bashrahil, member of the Presidency of the Southern Transitional Council, General Supervisor of the Health Committee, and Dr. Salem Al-Shabhhi, Chairman of the Higher Health Committee in the Self-Administration, in which Major General Bin Brik welcomed Mr. Terzian, praising the humanitarian role played by MSF in the capital, Aden and the south in general, and its unlimited contributions to relieve the health suffering of citizens, as well as its positive role in confronting the new Corona virus pandemic through its support to hospitals and health quarantines in Aden the capital, and the rest of the southern governorates.

The President of the self-administration stressed that MSF has many and significant contributions in the health aspect, and that the rumors that are raised here or there by some hostile forces for the purpose of distorting the role of international organizations in general on the ground will not affect the citizens in the south nor will they separate us as self-administration from providing protection and safety for it to be able to fulfill its long-standing humanitarian duty, stressing that such irresponsible behavior is a cowardly act by some of the forces hostile to the South and its own administration and its goal is to distort the role of international organizations and the general situation in the south, especially after the Transitional Council announced imposing self-administration on the south.

For his part, Mr. Migo, Head, expressed his thank to the President of Self-Administration for the good reception and the opportunity to discuss humanitarian and medical issues, and for his interest in the work of international organizations, including Doctors Without Borders, and his active contribution in overcoming the difficulties in front of the organization's work and providing it with the appropriate atmosphere to carry out the tasks of its humanitarian work with ease, expressing his strong dissatisfaction with the recent rumors that aim to promote the organization's loss of credibility and neutrality, which is at the heart of its work, stressing that the work of the organization is a humanitarian action that is neutral from politics and for any conflicting parties anywhere they are found ..