Major General Bin Brik in Mukalla: Hadhramout is centered for the South previously, presently, and later

Major General Bin Brik in Mukalla: Hadhramout is centered for the South previously, presently, and later 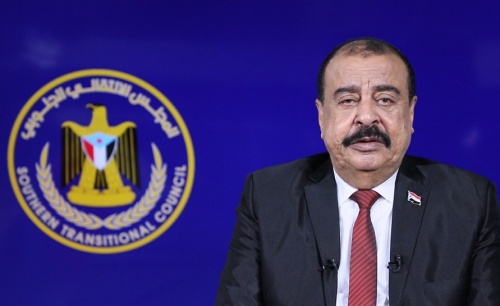 Major General Ahmed Saeed Bin Brik, Chairman of the National Assembly of the Transitional Council, President of the Self-Administration of the South, addressed on Saturday afternoon, the masses of people who gathered in the Freedom Square in the city of Mukalla in the millionth demonstration of "The Transitional Council is our Representative and the Riyadh Agreement is our demand", stressing that Hadhramout is southern, and it is centered to the south previously, presently, and later.

Major General Bin Brik delivered a speech in which he conveyed at its beginning the greetings of the President of the Southern Transitional Council, Supreme Commander of the Southern Armed Forces, President Aidaroos Qasim Al-Zubaidi, to the gatherings crowd masses of people, pointing out that this event has come to confirm that the sons of Hadhramout are at the heart of one man, at the time that the sons of the south celebrating in the capital Aden, in Socotra, Lahj, and Al-Dhalea, and soon in Al-Mahra, followed by Shabwa and Abyan, to complete the southern governorates circles in absorbing the self-administration and implementing its provisions.

He added: “The people of Hadhramout and all in the governorates of the south offered convoys of martyrs, and it is not easy for us, nor for you, to accept giving up our right and our demand for self-determination, and we continue to march towards the future of these generations and the future of our grandchildren.

Major General Bin Brik continued: “Dear brothers, the masses of people who answered the call from all the districts of Hadhramout, its valley, its desert and its coast, to say yes to self-administration,  to say yes to live, to breathe, to eat and drink, and these are the principles of implementing the priorities of self-administration that has chosen five issues and adopted them, which are first health, then electricity, water, education and hygiene. ”

Bin Brik continued his speech by saying: “We are in Aden, Socotra and Al-Dhalea are following up the implementation of self-administration in the governorates on the ground and we are seeking to overcome the stalemate that the governments of corruption have circulated, which prevented the delivery of electricity, water and equipment maintenance, and thus deprived us of our most basic rights in this life.”

Maj. Gen. Bin Brik pointed out that this mass crowd event of million to support self-administration and its establishment in the governorate of Hadhramout in its coast and valley, has come to say to the forces of corruption: “Leave from before us, leave so we walk to save this people, it is not acceptable that Hadhramout governorate produces what is equivalent to 120 million dollars per month and is deprived of electricity and water. ” emphasizing that the self-administration came to invest those resources that the Yemeni government is spending and its arms in the governorates for corruption.

Maj. Gen. Bin Brik also renewed “continuing the efforts to combat terrorism, which is still standing in the valley of Hadhramout and used by the arms of the government in Sayioun and its areas, where we lose lives daily due to cold-blooded killing, and through you today we direct that in the self-administration we will not allow nor will be satisfied to keep these to hover over Hadhramout in its valley and desert.

Bin Brik continued his speech to the masses, saying: “We would like to confirm through our meeting, which is the summary of your attendance and your participation in this event, that Hadhramout is complement to the capital of Aden in achieving self-administration on the ground, and the coming days will be for our efforts to implement it, whether with the absence of the government, or with the coming presence of the agreed government, let's have a decent life you deserve. ”

In his speech, Major General Bin Brik sent a message to the suspected and planted by Muslim Brotherhood who do not stop attacking the elite forces, that they have no room in Hadhramout and they are aware of this well, ”indicating at the same time that the salaries of the elite soldiers and officers and the brave southern armed forces in all governorates will be paid with thanks to the brothers in the Arab coalition, led by the Kingdom of Saudi Arabia, who showed great understanding and sympathy in this regard.

Major General Bin Brik concluded his speech by addressing the masses: “I tight at your hands, and your standing over here today is a clear message to those who say that Hadhramout is not southern.