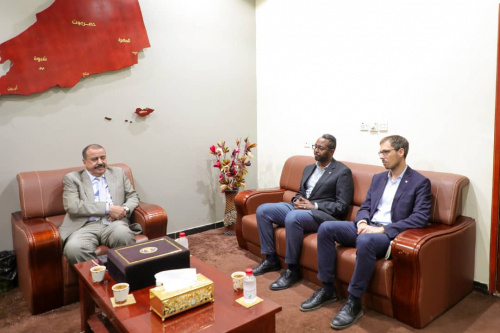 Major General bin Brik welcomed the new head of the mission and presented to him a clear image of the humanitarian situation in the south in general and the capital Aden in particular, including developments and military events that took place and lead to the announcement of the Self-Administration for the south with the imposition of the state of emergency after reaching the crisis with the government to its maximum in the conflict, and the sense of the total collapse of the state, stressing that he will see in reality the difficulties facing our people in the south, particularly in the service war launched by this government.

Major General bin Brik praised the role of the Red Cross Mission through its former deputy, Mr. Matthias Kumth, stressing that it has done well throughout the past period in providing humanitarian assistance in light of the crises that took place in Aden the capital, as a result of disasters and the spread of deadly epidemics, including the Corona virus.

The President of the Self-Administration of the South stressed on the need for continuous cooperation between the Transitional Council and the International Red Cross Mission, especially since the mission's areas of work are very important as they are purely humanitarian and for the public interest.

For his part, the new head of the Red Cross mission, Mr. Abdul Rahman Isa, expressed appreciation to Major General bin Brik and his deputy for their good reception and the brief explanation of the situation in the capital Aden in particular and the south in general, praising the volume of cooperation and coordination in place between the Red Cross mission to Yemen and the Southern Transitional Council, as well as the nature of the services provided to overcome the difficulties before the mission so that it can perform its duty and present its humanitarian message to the fullest extent, stressing that the Red Cross mission's activities will not be limited to the health field, but will extend to all areas of service and humanitarian, including the issue of prisoners.

In the same context, Major General bin Brik offered farewell to the previous deputy Head of the mission, Mr. Matthias Kumth, giving him a memorial gift for his humanitarian efforts throughout his work in Aden the capital and the south.

For his part, Mr. Matthias Kumth expressed his thanks to the President of the Southern Self-Administration for this honor, praising the good relationship that brought him together with the leaders of the Southern Transitional Council, and the effective contribution in overcoming the difficulties before his duties as a Red Cross mission's official, stressing that the relationship that was built will be transferred to his new colleagues who have more experience in the field of humanitarian aid, and they will present larger projects in the capital Aden to assist and improve the current situation.

Mr. Matthias noted that the ICRC delegation has presented many diverse projects in various humanitarian fields, hoping that his new colleagues will do more on the humanitarian side.

The meeting was attended by Dr. Salem Al-Shabahi, Head of the Health and Environment Committee of the National Assembly, Chairman of the emerging Corona Virus Control Committee, and Dr. Ahmed Aqil Barras, Director of the Office of the Chairman of the National Assembly, and on the part of the ICRC delegation, Mr. Bahaa al-Salami, Assistant Head of mssion. 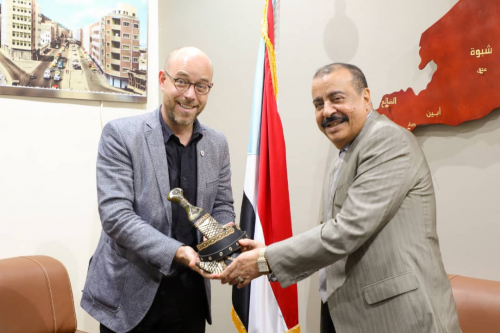