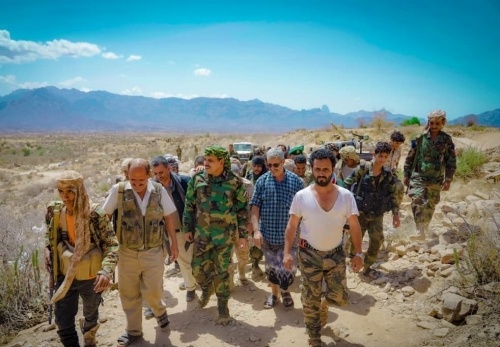 The Assistant Secretary-General and his companions visited the front lines of the joint southern forces, on the fronts of al-Job, Saleem, and Al-Fakhir, expressing his pride in the high morale of the fighters stationed on these fronts.

Al-Sokatri exchanged greetings with the commanders, officers, and the fighters, conveying to them the greetings of the President, Commander, Major General Aidaroos Qasim Al-Zubaidi, the President of the Southern Transitional Council, Supreme Commander of the Southern Armed Forces, praising the steadfastness and sacrifices of the heroes fighters and their heroism in countering the Houthi terrorist militias supported by Iran.

The Assistant Secretary-General emphasized that the southern armed forces and the resistance forces in Al-Dhali governorate were able, through their cohesion, resilience and daring, to create a new southern history in defense of the land and sovereignty, and provided their blood and souls for the sake of the pride of the southern homeland.

For their part, the fighters on the fronts of the Al-Dhali governorate expressed their happiness and pride in this visit of the leadership of the Transitional Council, stressing that they have a high combat readiness with a moral and steadfast spirit.

The fighters renewed the covenant of the southern political leadership headed by President Aidaroos Qassem Al-Zubaidi, and their constant readiness to fulfill the call of duty and defend the gains of the southern homeland in various circumstances and times.