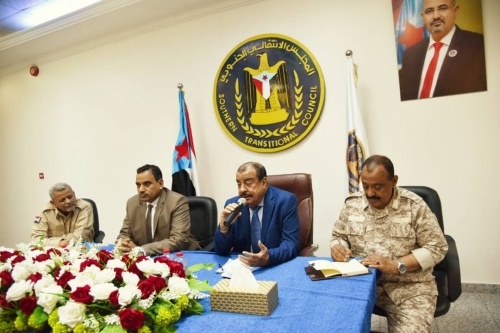 The meeting was attended by Major Salem Al-Sokatri, Assistant Secretary-General, Major General Fadhl Hassan, Commander of the Fourth Military Region, and Major General Mohsen Askar, Advisor to the President of the Transitional Council for Military Affairs, was dedicated to addressing a number of important issues related to developments in the political and military scenes.

The meeting, which included the heads of the General Secretariat departments of the Presidency of the Transitional Council, and heads of the National Assembly committees, members of the Transitional Council's Support and Decision-making Center, and heads of local leaderships in the governorates, in which the meeting reviewed the military developments on the fighting fronts against the Houthi militia in Karish and Therah, and the West Coast, and in particular the current situation in Al-Dhali fronts.

The meeting stressed on the need to support the steadfastness of the heroes on the fronts of north Al-Dhali, while intensifying efforts and coordination with the leadership of the Arab Coalition to provide the requirements of weapons and ammunition to the fronts, and work to develop solutions to treat the wounded and take care for the families of the martyrs.

The meeting also extensively stood before the rumors of attempts to form alternative irregular forces not affiliated with the security establishment, to replace the southern forces under the security administration of the capital Aden, where the meeting confirmed their absolute rejection of these attempts and their permanent standing alongside all the forces that contributed to the liberation of the capital Aden and the rest of the southern governorates from the Houthi occupation, and cleared it from the Brotherhood's terrorist hotspots, in which they are still defending the nation and its institutions, and fighting on various fronts to confront the Houthi and to secure the south.

The attendees expressed their deep dissatisfaction over preventing the leaders of the negotiating delegation of the Transitional Council from returning to their homeland, calling on the leadership of the Arab Coalition to justify these irrational actions with their sincere ally, despite the supportive position of the Transitional Council from the Riyadh Agreement and its positive engagement with the implementation of all its terms, and the continued clear failure of the legitimacy to leadership of the Coalition politically and militarily and its refusal to implement the terms of the Riyadh Agreement.

In the context, the meeting demanded that all the people of the great southern people stand together with the southern armed forces and the southern security and report any suspicious actions, through continuous communication with the security operations rooms.

The meeting warned of the continuation of the tampering with economic resources, and the continuous failure of the performance of the Yemeni government, that has internal conflict, and its failure to confront serious epidemics, and not taking any real measures to confront the threat of the spread of the deadly Corona virus, as well as its abuse to our people through non-payment of salaries and deliberately obstructing the work of services institutions,and its continuation of exclusionary and random appointments, and the implementation of campaigns of killing, abuse, and detention of our people in Shabwa, Abyan, Hadramout valley, Al-Mahra, and Socotra.

The meeting expressed surprising for the apparent inaction by the leadership of the Saudi 802 Duty Force in the capital Aden, and the failure to implement its previous commitment to pay salaries, which negatively affected the conditions of the security services members and increased the suffering of their families.

The meeting concluded in issuing a number of important decisions regarding the political, military and security escalation that will be implemented directly, provided that the Presidency of the Transitional Council and the Military and Security Committee remain in a permanent session to follow the developments and implement the decisions.