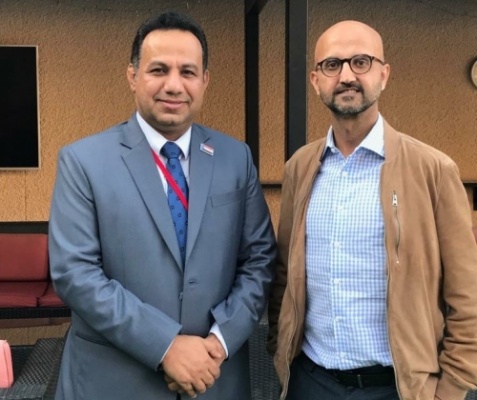 The representative of the General Department of Foreign Affairs in the Southern Transitional Council, Mr. Adel Al-Shabahi, met on Wednesday in the Saudi capital, Riyadh, with Mr. Ishtiaq Ghaffour, Political Adviser to the British Ambassador to Yemen, Mr. Michael Aaron.

For his part, Adel Al-Shabahi praised the activity and efforts of the Ambassador Michael Aaron and the accompanying mission to bring peace to Yemen.

Al-Shabahi affirmed the importance of the Kingdom of Saudi Arabia’s role in Yemen, stressing on the Transitional Council’s commitment and its leadership’s keenness to implement the Riyadh agreement in accordance with what was stated in its terms.