President Al-Zubaidi inagurates the third session of the National Assembly

President Al-Zubaidi inagurates the third session of the National Assembly 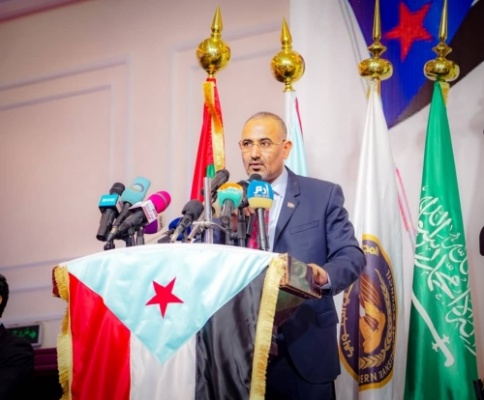 The session opening was attended by a number of the Southern Transitional Council Presidency members, and heads of Transitional Council local leaderships of the south governorates, in addition to heads and cadres of the departments of the General Secretariat and a number of civil society components and prominent social figures and all members of the National Assembly.

In the inauguration, President Al-Zubaidi delivered a speech in which he welcomed the participants and attendees at the third session of the National Assembly, stressing the importance of holding it on the occasion of the anniversary of Southern reconciliation and tolerance in which the people of the South folded a past and turned to the present for the future of freedom.

President Al-Zubaidi addressed the members of the National Assembly, saying that the aspirations of this people, and their freedom, could not be achieved without vision, will and action, therefore, the national responsibility makes it incumbent upon you today in the National Assembly - as representatives of the southern people's voice and aspirations - to continue with all the legitimate ways to express the southerners desire, needs, and ambitions.

In his speech, President Al-Zubaidi indicated that there are sources that made terrorism an effective political tool in the hands of our opponents, the enemies of our cause and our people, led by some parties, starting with the Houthi militias, and ending with the Muslim Brotherhood, that is unfortunately under the legitimacy, we confirm that we will not fail to combat and fight them.

President Al-Zubaidi said that we have proven to the world and the region that the southerners are peace advocates, and their patience was nothing but an expression of the hope to bring peace, and in respect to the calls for peace.

President Al-Zubaidi explained that the third session of the National Assembly is held under the title "for the creative implementation of the terms of the Riyadh Agreement." the failure of the other party to implement any clause reflects only their lack of seriousness with the Kingdom of Saudi Arabia, the Arab coalition countries, and the Riyadh Agreement.

President Al-Zubaidi referred to the humanitarian situation in the south, which reached a catastrophic level in light of the lack of people to the minimum basic services, stressing the repeated warnings that ignoring the foregoing, had the results of everyone has known, and we do not want them to be repeated.

President Al-Zubaidi talked about the danger of the Houthi militia, noting that it is still standing, stressing that we will continue to defend our land and will not allow this danger to return again, indicating that the Arab coalition countries made great efforts that helped defeating these militias.

President Al-Zubaidi concluded his speech by renewing commitment to the approach of dialogue and peace, preserving the unity of the southern ranks, and persistence on the principle of reconciliation and tolerance, indicating that hands are always extended to everyone who wants a free and independent southern homeland.

Ben Brik said: "Our southern people have been resisting and will resist to achieve all their aspirations as we changed the sad memory to bright one of reconciliation and tolerance, stressing that the political leadership of the Southern Transitional Council, headed by President Aidaroos Qasim Al-Zubaidi, standing with responsiblity with the rights of our people by signing the Riyadh Agreement.

Major General Ben Brik pointed out that after the signing of the Riyadh Agreement, our people suffered alot, in many sides such as preventing the treatment of the wounded, and stopping the salaries of fighters in the fighting fronts against Houthi, and unleashing ISIS with the aim of obstructing the implementation of the Riyadh Agreement.

On the other hand, Major General Bin Brik reiterated that the leadership of the Transitional Council and the people of the south in general stand with the brothers in the Arab coalition to implement the Riyadh agreement and achieve its positive results.

Maj. Gen. Ben Brik pointed out that the transitional council remained committed to implementing the Riyadh agreement to reveal to the coalition and the world who is the real obstacle, stressing that we are advocates of peace and we want our people peace, stability and security.

Major General Ben Brik confirmed that the National Assembly and its members will stand before any difficulties facing the people of the South with historical decisions that meet the aspirations of the people.

The opening period of the third session of the National Assembly was inaugurated with the national anthem and verses from the Qur’an, and the attendees observed a minute of mourning on the souls of the martyrs of the south, and a number of poems were read at the opening.

The opening period of the National Assembly’s third session, witnessed honoring a number of entities and personalities that participated in promoting reconciliation and tolerance. 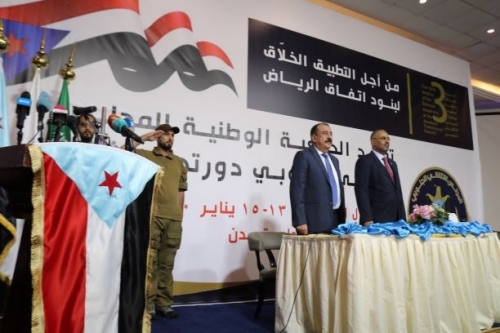 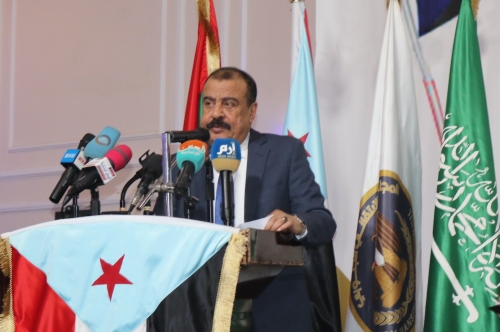