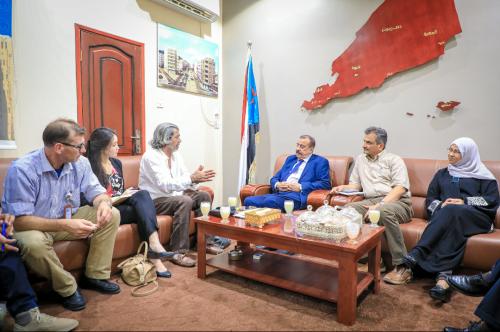 Chairman of National Assembly of the Southern Transitional Council, Maj. Gen. Ahmed Saeed bin Brik, discussed on Wednesday with Mr. Marwan Ali, Director of the Office of the UN Envoy to Yemen Martin Griffiths, the latest developments in Aden and the South, and the exerted efforts to resolve the crisis and ways to reach positive solutions through initiatives and calls for dialogue.

During the meeting, Maj. Gen. Ben Brik presented the status and causes of the events in Aden the capital, Abyan, and Shabwa, and the way that the Transitional Council dealt with them, besides its efforts to normalize life by providing public services to the citizens.

Maj. Gen. Ben Brik stressed on the keenness of the Southern Transitional Council to maintain public tranquility and stabilize security and stability in Aden the capital through pursuit the terrorist groups covered under legitimacy, and thwart their sabotage scheme to takeover Aden in particular and the south in general in the hands of the forces of terrorism.

For his part, Mr. Marwan Ali, Director of the Office of the UN Special Envoy to Yemen, Martin Griffiths, affirmed the support of the United Nations for all efforts aimed at the success of dialogue and finding just solutions, especially for the southern issue to achieve consensus.

Marwan Ali stressed on the importance of continuing the work of the United Nations organizations in all areas in Aden the capital and the rest of the provinces, and provide services to contribute in the normalization of life and not to prejudice the services associated with the lives of civilians or disrupt, and work in accordance with international standards.

He pointed to the need to activate the role of the media to be a professional media in the dissemination of facts and ensure the correctness of information and facts to serve the current developments on the ground and be supportive of peace and contribute to the resolution of the Yemeni crisis.