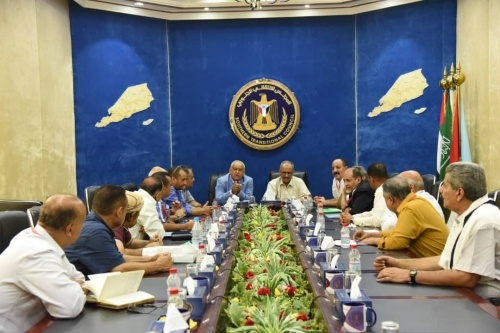 Members of the Presidency of the Southern Transitional Council met on Saturday in Aden the capital, Eng. Moen Abdullah Almas, the envoy of the United Nations Office for Project Services (UNOPS) and his accompanying team.

In the meeting that was chaired by the Assistant Secretary General of the Presidency of the Transitional Council, Mr. Fadhl Al-Jadi, and Dr. Abdul-Nasser Al-Wali, Member of the Presidency of the Council, and Mr. Abdul-Salam Homaid, Member of the National Assembly of the Transitional Council, discussed ways to find solutions for basic services that citizens are suffering due to its deteriorating, and to provide fuel, electricity, water and hygiene and taking the necessary measures.

The meeting was attended by the Director General of Aden Electricity Mojib Al Shaabi, Eng. Mohammed Bakhbira, Acting Executive Director of Water Corporation in Aden the capital, Commander Rashid, Executive Director of the Cleanliness and Improvement Fund in Aden the capital, and the Advisory Committee of the Transitional Council, and Mr. Ahmed Al-Wali for the Civil Society Organizations, and Mr. Mohammed Alkaldi, representative of Private Sector.