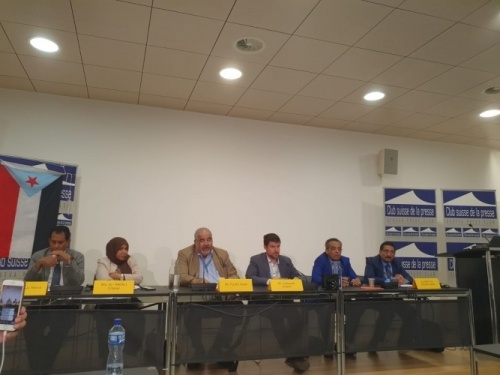 Under the sponsorship of the Southern Transitional Council, a seminar entitled "The Right of the People of the South to Restore their Independent State" was held on Thursday at the Swiss Press Club in Geneva on the sidelines of the forty-first session of the United Nations Human Rights Council.

In the seminar, Dr. Aidaroos Nasr Al-Naqib, head of the General Department of Foreign Affairs of the Southern Transitional Council, delivered a speech on the international and national legitimacy for the restoration of the independent southern state, indicating the legal foundations and sacrifices of the people of the South to achieve their legitimate aspirations.Al-Naqib stressed on a number of facts related to the justice and legality of the southern cause, reviewing the gross violations on human rights in the south, as the south was subjected to war and invasion twice, in which there were violations by the Houthi militias such as house demolitions, bombing processions of displaced and their place of residence, and killing children, women, and elderly, besides murdering just for fun and enjoyment.He pointed out that the results of the wars of (1994 and 2015) still exist because of the failure of the legitimate authority to activate the principles of justice, and not performing any of its duties that any authority, whatever the degree of its weakness, would do whether in services, judicial, executive, security, or development, as this authority implements the policy of its extremist powerful personalities that aimed at starving and impoverishing the people of the south and forcing them to accept the results and policies created after the war of 7/7/1994.

Dr. Al-Naqib stressed that resolving the southern issue requires respecting the will of the southern people and granting them the legal and natural right to restore their state and choose their free path towards the future that is determined by its citizens.

Counselor Abdel Rahman Al-Mosibli, representative of the Transitional Council in Geneva, delivered a speech reviewing the failures of the Yemeni government's report to the Universal Periodic Review of the Human Rights Council.

The rights activist, Intisar Al-Hudali, also reviewed the violations and crimes committed by the Houthi militias against the civilian citizens during their recent attacks on the province of Dhalea.

Mr. Faisal Foulad, Head of the European Gulf Center for Human Rights, talked about the Iranian role in the region, discussing the support given by Iran to the Houthi militias over the past years.

The seminar, which was broadcast directly to the Swiss and international media, was attended by international organizations and personalities interested in the South, and some journalists, including the representative of the Swiss radio and television.