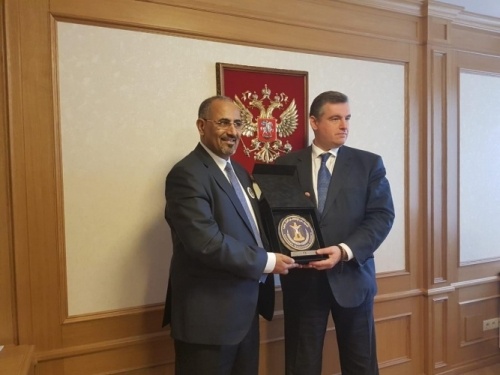 The President of the Southern Transitional Council, Aidaroos Qasim Al-Zubaidi, concluded on Sunday an important high profile visit to Moscow, which included meetings with Deputy Foreign Minister Mikhail Bogdanov and members of the Russian Federal Assembly, including meeting Leonid Slotsky, Head of the International Affairs Committee of the Duma, in which the visit coincided with meetings in Aden between the leadership of the Southern Transition Council and the Russian ambassador to Yemen Vladimir Dadushkin.

At the end of the visit, President Al-Zubaidi said: "We appreciate the warm welcome received by our delegation from the Russian Foreign Ministry and the members of the Federal Assembly ... We are pleased to meet the invitation of our Russian friends and we look forward to develop a strategic relationship with Moscow to ensure meeting the right of the people of the South to resolve their cause and will, as well as for ensuring the regional stability.

President Al-Zubaidi added: "During our meetings in Moscow, there was a collective agreement on the goal of a credible political solution, including a permanent cease-fire based on the Stockholm Agreement, that was the position of the Southern Transition Council since the beginning, and we will continue to interact with the UN Special Envoy Martin Griffith and the international community as part of this commitment".

He said:" in Moscow we agreed on the importance of addressing the southern issue for the success of the political process in Yemen and the stability of the region; we praised the reality of the leadership in Russia and we look forward to working together to ensure that. "

President Al-Zubaidi continued: "One of the most important issues in our discussions has been the Southern Transitional Council's plan for the provinces that make up the southern Yemen," adding: " The ideas and policies before the year 2015 can no longer be applied with the current situation. We have presented our visions about our role in various sectors, from humanitarian aids, and counter-terrorism, to the security and governance arrangements. "

He continued saying:" The Southern Transitional Council is already leading a lot of this work on the ground, and we are ready to be a partner with the international community to support the success of fair and reasonable political process that will restore stability to the region and eliminate existing threats and dangers".

President Al-Zubaidi said: "we have made it clear that there is a need for genuine representation of the South in the scene to form the results that will ensure the success of peace as will as the southerners through them will determine their future. This requires placing international guarantees on the table for the interests of the people of the South to get their confidence in the political process. At the end, the question of what this future should be is left to the people of the South, and our responsibility as their representatives is to provide a way to do so. This is the only way to achieve a sustainable peace, and we look forward to our Russian friends to lead to ensure our presence in the political process and support the demands of the South. Finally, we look forward to the day when we can reestablish diplomatic relations between our two countries in our capital Aden. "