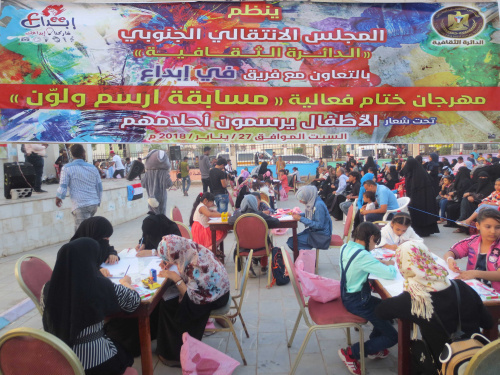 Under the motto , ‘Children Draw Their Dreams’, the Cultural Department of the Southern Transitional Council, in cooperation with the team of   ‘ Fe Ebda’  organized the final session of the competition of  ‘ Draw and Colour’.  The competition was held in Al Baraem  children’s park in Maala-Aden.

The event started with reciting of verses from Holy Quran and the Southern National Anthem.

Jury of the competition artist Foad Fotih addressed the need to encourage and take advantage of those talents to develop children’s creative abilities .

Terms and conditions of the competition were delivered to the contestants which were followed by presenting the names of each contestant .The competition received positive reaction from the audience.

At the closing stages of the event the drawings were sorted and inspected by the jury  where the results of  the winning drawings were announced .

The event was present by chair of the Cultural Department of the Southern Transitional Council Dr. Mona Basharaheel  and  a large number of audience.