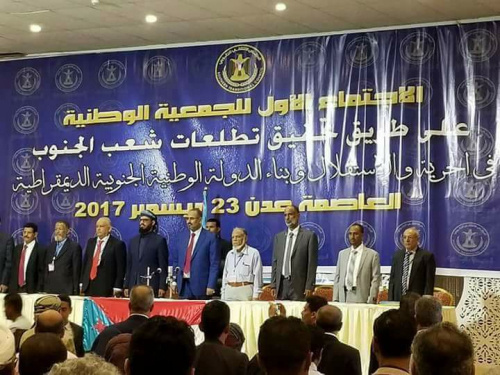 The Presidium of the Southern Transitional Council headed by Aidros Al Zubaidi , vice president Sheikh Hani Ben Berek and members of the presidency inaugurated its  first National Assembly meeting this morning . The National Assembly, which consists of 303 members , represent all the southern governorates .

The meeting was attended by the members of the national Assembly and a number of military personnel, politicians, guests and the press.

At the inaugurating ceremony the presidium and the members of the National Assembly vowed to continue moving forward towards reaching the aims of the southern cause in reclaiming and building the independent modern southern state.

The ceremony started with a reciting of verses of the Holy Qoran which was followed by a one minute silence to pray in respect of those who have lost their lives serving their country.

He pointed that the Capital Aden took  the lead in the past  in having  parliamentary experiences in the Arabian Gulf at the first half of the last century, that  work was evident   in all the legislative acts which were embodied in  parliaments which reflected the democratic institutional work, before being hit by  the storm of events and conflicts which we are all aware of .

He drew the attendants attention to the fact that the members of the parliament will work with determination  firmly to  build  the foundations  of  an institutional system , even though the country is experiencing a lot of decisive events, adding that choosing the  National Assembly members was  according to many criteria and not randomly assuring that those who were chosen will give their utmost to serve the southern people and its cause .

Addressing the National assembly members Al Zubaidi said, ‘ The presidium of the STC ,its members  and the people of the south are all looking up  to you  and trust you so don’t let them down, this is an historical responsibility incumbent upon you and an honor and the  trust is placed upon you ,we will stand by you and  assisst you to accomplish your duties to the fullest.

He added, ‘We in the South of Arabia , since the launch of the ‘Decisive Storm’ military operations, have played  a major part in all forms, political, military and  social and the people of the south have proved in the early months that it was an active participant in the battle fields  achieving military victories, not exaggerating if I say ,that the victories achieved by the southern resistance assisted and helped the Arab coalition forces which had a major  impact on the defeat of the Houthi  militias  , had exceeded all expectations’.

He said, ‘The fact that all those victories could have not been achieved without the blessing of God Almighty and the deep belief in two major factors; first, full and complete equal balance between us and our brothers in the Arab coalition forces , regarding the seriousness of the Iranian presence in our  Arab countries , which represents a real threat to the  Arab national security in General and the national security of the Arab gulf states in particular. To Be specific, Iran has demonstrated its expansive practices and policies with national ambitions through trying to have influence in our Arab countries under abhorred religious cover up .Al Zubaidi renewed his commitment to move forward with the Arab coalition forces in this war against  the expansionist Iranian project.

Second, the reason for participating with the Arab coalition forces was justified in the strong belief of the Southerners and their project to achieve full independence and build a free and independent Southern State was the main strategic national objective motive is the secret of its  success.

He drew attention to the struggle for the southern cause since the 7th of April 1994, the day the Yemen Arab Republic has dropped the united project by force of armed power ,through a war which was witnessed by the international community due to that war  international resolutions have been put forward . He pointed to the brothers in the Arab coalition led by KSA and U.A.E. and the rest of the GCC countries to support the southern cause and consider it  as an integral part of the Arab Peninsula countries taking into account  its  important strategic geographic position on the world map .

President of the Southern Transitional Council Al-Zubaidi said , ‘ In this regard, we wish to draw the attention of the brothers in the Arab coalition and the  permanent representative to the United Nations, Mr Ismail Weld  Sheikh to the following facts:

First, ignoring the  (Southern Issue ) based on  the political process which was practiced in  Sanaa since the launch of the so-called national dialogue and its  outcomes, was considered  a deceptive escape from the main ussue which is the issue of a homeland, people and an  identity, therefore those outcomes  cannot be a baces  to resolve the southern issue.

Second, the approach of political negotiations under the auspices of the United Nations in the period since 'Decisive  Storm' , with respect to the intensions and priorities  of Mr Weld Sheikh , was to search for a solution to the southern issue, as a priority for a settlement and not vice versa  .

Third , you might have noticed that the situation on the Yemeni arena changes rapidly due to the  swift appearance and disappearance of certain factions due to the Political and military developments, these do not change the essence of the southern issue because it is an issue of a nation and an identity .

Forth, to have an  independent southern state based on  the boarders  pre  22nd May 1990, is considered a major asset to the Arab national security in general  and a barrier  to the Iranian presence and an impenetrable force against the Iranian existence and it is consistent with the  resolution of the GCC in Abha on the 5and 6th of June  1994 , which says (The unity which was supported by the GCC cannot continue without mutual consent) a fact, we hope that our Arab brothers deal with the southern cause on that basis.

Fifth, although we appreciate the conditions and requirements of the Arab conflict with the Iranian project and the strategic objectives of the ‘Decisive Storm’ in which we are part of ,we hope that these alliances should not be at the expense of our national cause, the southern issue , which is an issue  of existence and fate. At the same time we are open for dialogue to all who want to give wise advice in Yemen and who support the southern issue and self determination , to support  a real partnership between two interests in two states both  in Aden and Sanaa sponsored by the Gulf  states to deter the  Iranian presence in all its forms.

Sixth, the southern people have proved that it is a loving nation eager to live peacefully in its independent free state with its neighbors, assuring its ability to combat terrorism and extremism in all its forms. The Southern people are able to present themselves  as a guarantor for any regional peaceful solution in the region to safeguard true  stability in .this part of the world with its marine and geographical entries

President of the presidium added,’ The presidium takes into consideration the unsettling circumstances that are taking place at the moment because of the political and military changes which we are witnessing but we reassure you that we will be standing by you and support you unconditionally asking you to stand firm and be patient and vigilant to what is happening around you.’  He asked them to be aware of the conspiracies which could be plotted against this project just to fail it and to dismantle their  unity saying , ‘We were able previously to overcome those conspiracies and will continue to fail those  attempts’.

‘The people expressed, through the most difficult and high degree of tolerance and reconciliation the solid ground of unity at the same time, opening  doors to accept one another assuring that dialogue is the only way and is the best and civilized way to bridge the gap between conflicting sides’, he said .

Addressing members of the National assembly Al Zubaidi said that the south is their responsibility so they must make sure they stick to their principles,  establish their  positions, build a fence of Justice , poise and wisdom and  raise the flag of the nation .

He reminded them by saying , ‘The  southerners are waiting for you so , be an example in being  responsible and by working together, we'll get through hard times  together, we will get to to the other side where there will be security , peace and  independence.

I can only conclude that I thank you, I also would like to thank the southern military and security leaders present here with us in this historical event’.

On his part Vice President of the Presidium of the Southern Transitional Council Sheikh Hani Ben Berek said , ‘The National Assembly is a historical event and is the  first southern  parliament since 1990 this time the members were chosen in the future  members of the National Assembly will be elected.

He added that the members of the parliament have a great responsibility upon them and they are tasked to reclaim justice back to the people of the south , and that they have to work together and amalgamate their efforts to be able to face the enemies and  have to face all difficulties ,not to surrender ,for the STC is a foundation for a coming independent state .