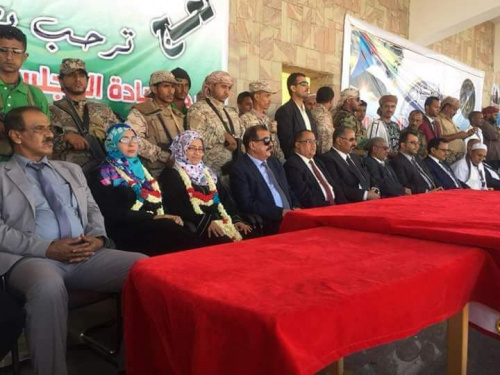 At the opening ceremony, the president of the Southern Transitional Council Maj. Gen. Aidros Al-Zubaidi, delivered a speech in which he said here we are today in Lahj to inaugurate the National Assembly and the Local STC headquarter of Lahj and Dali' governorates within the plan to build structurally the council bodies in all the southern governorates in preparation for the next phase. Our happiness is ineffable for being with you here in the valiant province from which the glorious revolution of the 14th of October had been triggered and from which the southern state was born with its geographical borders that have political connotations recognized by the United Nations before being subjected to a brutal annexation after the failure of the Yemeni unity project.

He added that from the valiant Lahj and the resistant Dali', the essence of the southern existence had been preserved when the inhabitants of the two provinces emitted the sparkle and awakened the giant of the Southern Movement 'Al-Hirak' against the northern Yemeni occupation to trigger the revolution in all the southern governorates. That's why we have the right to say that Lahj with all its districts is considered as an inspiration to us all in struggle, revolution, freedom, stability and advancement, especially al-Houta and Toban that deserve greetings and appreciation for achieving a unique model of stability, security and unity.

The STC president Maj. Gen. Aidros Al-Zubaidi pointed out that the Transitional Council inaugurated its National Assembly and the Local STC headquarters in a number of the south provinces; Shabwa, Hadramout and al-Mahra where the voices were united, expressing the cohesion of lined up rows from al-Mahra to Bab al-Mandab, behind the transitional council chosen by the people of the south to be a political representative and holder of the southern cause and their voice in the different local, regional and international forums.

Al-Zubaidi stressed that the Transitional Council builds firmly its organizational foundations and bases and proceed with  full confidence derived from the brave people of the South that Sana'a along with all its forces, parties and militias failed to defeat them and to extinguish their revolution in the past years, in more difficult and deteriorating conditions than today.

He said that our southern people resisted the tyranny and the arrogance of the occupiers in all its forms and was able to weaken the repression machine that Sana'a regime used to suppress the peaceful rallies and protests staged by al-Hirak since 2007. Our people absorbed all the heinous crimes and massacres with their invincible spirit and their relentless will. We are all confident that our southern people today have become more determined and more united especially after the victories achieved by the heroes of the southern resistance in this free and pure land, the land of the South.

He went on to say to the southerners that in a way that you made victories over  Iran's proxy militias and its tools coming from the north and as you made victories over their other face; the groups of terror and sabotage, you will win in the fierce political battle led by your Transitional Council. The promises of victory are looming on the horizon and getting closer day after day.