Shatara in an interview with Sputnik : Zubeidi will Not Crumble Because He Has Strong Public Support

Shatara in an interview with Sputnik : Zubeidi will Not Crumble Because He Has Strong Public Support 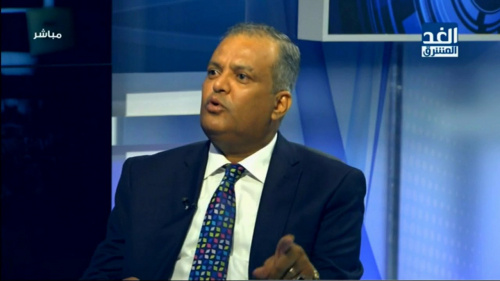 South Arabia, that is the favorite noun used by the people of the South, reassuring that they have a just cause .They defended their land against what they describe as The Ansar Allah  "Coup”.
People of the South supported the Arab Coalition forces  since 2015. The formation of the Southern Transitional Council last May came to represent them internally and abroad.
Sputnik, conducted a telephone interview with "Lutfi Shatara " member of the Presidency and head of the Department of Information of the Council, in which he discussed what awaits the Council and its future plans.
Sputnik : Will the STC continue its plans as it has set out to do ,or will the restriction and harassment by the government marginalize it’s role?

Shatara: The Transitional Council never came by the will of elitist ,but came by a popular  demand will which took to the streets on the 4th May2017. On that day  the people of the South  bespoke Commander Aidrous Al Zubaidi as their leader  of the Southern transitional Council..
Of course the legitimate government  doesn't  agree that the Council is a representative of the real will of the people of the South, especially after the war of 2015 and which changed the equation on the ground.
Today the will of the people of the South is represented by the Council.
Sputnik : Many are betting on the collapse of the Council during the next period, what do you think?
Shatara: The council will never collapse despite the difficulties and vendettas it faces because it is built on a strong foundation which is the southern people , its collapse means the collapse of its cause . We are here to represent the people and we are here by  popular consent and there was full consent  by the people on the 4th May 2017 demanding that the  STC is the representative of the Southern people and it’s cause .
Sputnik : What about the legitimate government’s actions and declarations which directly challenged the council by sacking a number of governors who have announced their  support to the council ?
Shatara: The government’s decision to sack the governors was not wise and was an immature move , it only proves that they do not want representatives  of the people even though they are government officials from the southern governorates.
Definitely the council is here to stay in addition to   the governors who were sacked  because they  are members of the presidium of the council and because they are here to represent the southern peoples cause to regain its southern state as well as  to represent the people in any direct representation of the southern issue .
Regrettably the government is negotiating with its direct enemy who has turned against them rather than negotiating with Southern people who have won victory in this war. Therefore  it would have been  better for the government to negotiate with the people of the south and those who represent them and, who with the Arab coalition, have stood by the legitimate government.
We southerners are partners with the coalition and international community after retrenching and protecting our waterways  and the international trade route and freed the southern provinces right after the war, we are all partners in the fight against terrorism and in dismantling  its bases..
Sputnik: Why did the Media momentum of the Southern Transitional Council disappear  in its early days, is it due to your limitations   or is it because of the governments restricting you ?

Shatara: The Council is expanding  and will never disappear from the spotlight
We are now touring  the provinces to establish a representative and its coordinating councils in the Southern governorates and we are preparing a national body which is similar to a  miniature Parliament, as well as  a lot of organizational work on the ground and not everything what the  Council does can be talked about.
We are now in the process of arranging the Department of  Information and
the next step is establishing the Council’s website in more than one language to display all the Council's activities to all followers, journalists and politicians at home and abroad,
We aspire to have our own satellite channel in the near future, in order to  open relationships with all media through a team which is equipped to manage the department  to present the political activities on the ground in the provinces.
Sputnik: By this procedure you will  turn the Council into a political party, this is what Hadi’s government  wants you to turn into?
Shatara : We are not a political party .The STC is a leadership which must have rules to be able to achieve objectives and deliver the council’s   policies to the people and must be elected by the people.
We cannot turn into a political party because we came up with a popular mandate, this is what  we represent in the provinces to work the interrelationship between the  council and the people.

Sputnik: Remarks attributed to the President of the Council say that "We have a lot of ways to serve the southern cause." What means do you possess to execute your goals?
Shatara: The  Council’s  President "Zubaidi" did not  make any remarks over the last few days to any form of  media and more importantly, we express the will of the people who are supporting us .
Sputnik : What are the Council’s components?
The council is a leadership and not a component, the component is the political quotas. Those leading  reflect different categories of southern provinces, but not as  a partisan representation formula or political component.
Sputnik: You say that the Council represents  the street, where are the other political components, such as the Southern movement (Hirak) for example?
Shatara: All the leadership of the council are from the Southern  Hirak, Aidrous Al-Zubeidi is from the Southern Hirak and a leader in the resistance .The southern movement ( Hirak) is not an institution and I represented the Hirak at the National Dialogue Conference which was held in Sanaa in 2014.
People have to understand that the Southern Transitional Council is not  a monopoly for a specific group and that the doors are open for all who want to negotiate with the council and we will not   say that we are the representative on behalf of the people , In the literature of the council’s leadership we do not acclaim that we are the only representative of the Southern people.
Sputnik: What is the Council's position on the calls to go back to the outcomes of the 2014 National Dialogue to resolve the current crisis in Yemen?
Shatara: We are in direct contact with representatives of the United Nations and with our brothers in the region and I have made a number of visits to Germany Britain and France where  we spoke about the Southern Issue. We reaffirmed to all that  that any solution which does not include the Southerners or their representatives  we will not be inclined to adhere to . There is no force on earth which will force us to accept what we do not believe in .If any side wants to get to a solution through negotiations ,we as the Southern Transitional council , will be willing to participate and we are willing to negotiate with the Northern parties.  We cannot delete or exclude the North from the map and they in return will not be able to throw the South into the sea .
Sputnik: What is your position on the of 2014 Sanaa dialogue outcomes ?
Shatara: The outcomes of the dialogue was before the war, and the war imposed a new reality, we reject anything which includes ruling liberated  Aden from Sana'a.
Sputnik: That means you refuse any connection with the North ?
Shatara: We are telling all people in and abroad to listen to what the people want and need, the people who resisted and fought in the 2015 war have  imposed a new reality on the ground , the people know what they want , we do not want a readymade imported  solution.
Sputnik: What are the main objectives set by the Council on its priorities agenda?
Shatara: The Council has a number of priorities on his agenda the
most important one is concentrating on  is its expansion throughout  the southern provinces. In addition to expanding relationships within the region, the  coalition countries, Arab countries and the international community and the United Nations in particular.