In First Meeting of the SSJMM's Executive Office.. 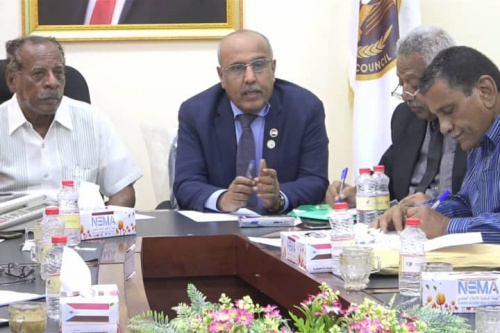 Mr. Ali Abdullah Al Kathiri, member of the Presidium of the Southern Transitional Council (STC) and head of the National Southern Media Authority (NSMA) attended on Thursday, the first meeting of the executive office of the Syndicate of Southern Journalists and Media Members (SSJMM), which was chaired by Mr. Aidaroos Bahashwan, the head of the SSJMM.

Mr. Al-Kathiri delivered a speech in which he congratulated the elected members of the executive office emanating from the FCSJMM, and on obtaining this confidence in the headship of the SSJMM, conveying to them and to all southern journalists and media members the greetings of President Aidaroos Qassem Al-Zubaidi, the President of the STC and Vice-Chairman of the Presidential Leadership Council (PLC).

Mr. Al-Kathiri stressed that the next stage requires exerting more efforts and perseverance in fulfilling the professional and living demands and rights that are expressed in the recommendations of the FCSJMM, and urged the SSJMM to translate the outcomes into working plans and programs that contribute to developing the performance of the southern media.

Likewise, Mr. Al-Kathiri offered his support for the SSJMM, which opened its doors to all southern journalists and media members to gain the honour of membership in this SSJMM without any exclusion or sidelining of any person or entity, praising the SSJMM's direction to accommodate all media members who attended or missed the FCSJMM, and to give all journalists and media workers equal opportunities in membership as per the conditions set by the SSJMM's by-laws.

Similarly, Mr. Al-Kathiri pointed out that the next stage requires the efforts of all press pens and various forms of media to express the aspirations of the people of the South in restoring their independent, federal state of the South. He referred to the outcomes of the FCSJMM’s final statement, which called for reclaiming the inoperative institutions of southern media and raising the level of professional performance and living conditions of southern journalists and media members.

For his part, the head of the SSJMM, Mr. Aidaroos Bahashwan, confirmed in the meeting, which was attended by Mr. Issam Wadi, general manager of Organizations and Unions in the Office of Social Affairs and Labour in the capital, Aden, that the work and programs of the SSJMM will express the aspirations of southern journalists and media members and achieve what was stated in the recommendations of the FCSJMM in a friendly and professional spirit.

The meeting of the executive office of the SSJMM started its agenda by registering the minutes of the ongoing activities and of the establishment of the SSJMM and its elected headship under the official supervision committee of the Office of Social Affairs and Labour in the capital, Aden, as a legal measure affirming the legitimacy of the existence and work of the SSJMM and its bodies, including the General Council, the Executive Office, the Supervision and Inspection Committee, working committees, and departments.

In addition to that, the meeting discussed several topics related to the SSJMM's activities in the next stage, and a number of procedures and mechanisms were adopted in that regard.