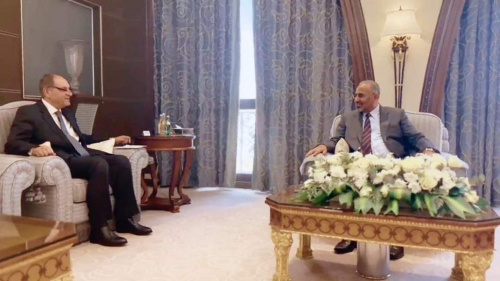 President Aidaroos Qassem Al-Zubaidi, President of the Southern Transitional Council (STC) and Vice-Chairman of the Presidential Leadership Council (STC), hailed the strong bilateral relations that have existed between our country and the brotherly Arab Republic of Egypt and the pivotal role of Egypt in exerted endeavours to make peace.

It took place when President Al-Zubaidi received Mr. Ahmed Farouq, the non-resident Ambassador of the Arab Republic of Egypt to Yemen, on Thursday, as the president expressed his congratulations to the Egyptian leadership on the success of the brotherly Arab Republic of Egypt in hosting the climate conference that was held recently in Sharm El-Sheikh, affirming that this remarkable success in hosting the conference reflects its weight and presence both at the regional and international levels.

During the meeting, they discussed prospects for joint cooperation and ways to enhance the security aspects. In this regard, President Al-Zubaidi expressed his confidence in the Egyptian Navy's assumption of the tasks of commanding the joint international forces to secure the al-Mandab strait and the Gulf of Aden, to protect the security and safety of regional and international waters, and international shipping lines, through the well-prepared Combined Maritime Force (CMF) (153), with the participation of our armed and security forces.

The meeting reviewed the latest political, security, and economic developments in our country, and the endeavours exerted at the regional and international levels to bring peace to our country, where President Al-Zubaidi expressed his hope that those efforts will bring peace to our country through a comprehensive political process that accommodates all issues, foremost of which is the cause of the people of the South.

For his part, the Egyptian ambassador reiterated his country's position in supporting the legitimacy of our country, represented by the PLC, and assisting the efforts made at the regional and international levels to end the war and establish a lasting peace.