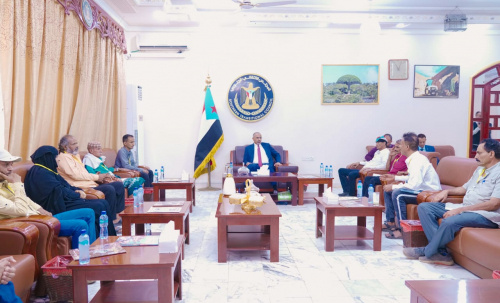 President Aidarous Qassem Al-Zubaidi, the president of the Southern Transitional Council (STC), Deputy head of the Presidential Leadership Council(PLC), on Tuesday, met at his office, in the STC's headquarters, in the capital, Aden, with the headship of the Public Union of Southern Teachers and Educators (PUSTE).

President Al-Zubaidi listened from the headship of PUSTE to a satisfied explanation of the teachers' challenging circumstances and the high level of inflation, in addition to a set of opinions and suggestions to solve the teachers' troubles, lift the strike announced by the Union, resume the educational process, and ensure its continuity.

At the meeting, the president affirmed that fulfilling the demands of teachers is a priority for the leadership of the country, as they are the beacon of enlightenment in creating leaders and future generations rely on them. He noted that the education front is no less important than the rest of the fronts in which the personnel of the Southern Armed Forces embody heroic epics to maintain security and stability.

The president, too, reiterated that the PLC appreciates the challenging circumstances encountering the teachers, calling for a mutual understanding of the exceptional conditions experienced by the country, and a concern for the students' future and not leaving them as prey to the parties and organizations that do not want the good of the South and its people.

The president stressed the importance of the PUSTE's headship to assume its responsibility towards the educational process, and deal from a national standpoint with the initiatives and solutions that were exceptionally presented to resume the educational process while continuing its efforts and endeavours to protect the rights of teachers in accordance with the legitimate and legal frameworks.

To the end of his speech, the President addressed the attendees, emphasizing that the continuation of the strike is in the interest of none, and that they have a moral and human responsibility towards students and parents who are forced to bear additional costs in light of the difficult conditions in the country, to ensure that their children are not left without education.

In turn, the headship of the PUSTE expressed its welcome to the call made by President Al-Zubaidi, and its commitment to lifting the strike, acting upon responsibility and patriotic concern for the future of the students, and valuing the keenness of the president to solve the problem of teachers, pay their dues, and meet their legitimate demands.