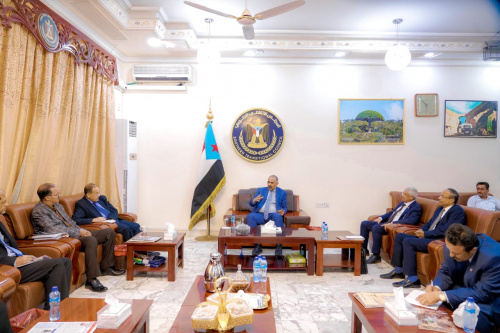 President Aidarous Qassem Al-Zubaidi, the president of the Southern Transitional Council (STC), Deputy head of the Presidential Leadership Council, on Sunday, at his office, in the STC's headquarters, in the capital Aden, gets briefed on the outlined schedule of the Internal Southern National Dialogue Team (ISNDT) for the upcoming period.

The president listened from ISNDT to a satisfied explanation of the significant achievements by this team and its meetings with various political parties, unions, syndicates, civil society organizations, and different social communities with the aim of introducing them to the outlines and programs of ISNDT and the steps that have been fulfilled in the course of the internal dialogue to reach a broad national front that puts the fundamentals of the aspired State of the South, based on a real partnership and social justice.

In turn, the head and members of ISNDT expressed their thanks and appreciation to President Al-Zubaidi for his support and assistance to endeavours of the team and his direct intervention to ease the difficulties encountering their work.